Animal Farm is not about the Russian Revolution: some thoughts on teaching historical context

The current orthodoxy is to front load the teaching of historical context when approaching a novel. But what if that gets in the way of meaningful literary study? Andrew McCallum considers an alternative approach when teaching Orwell's classic. 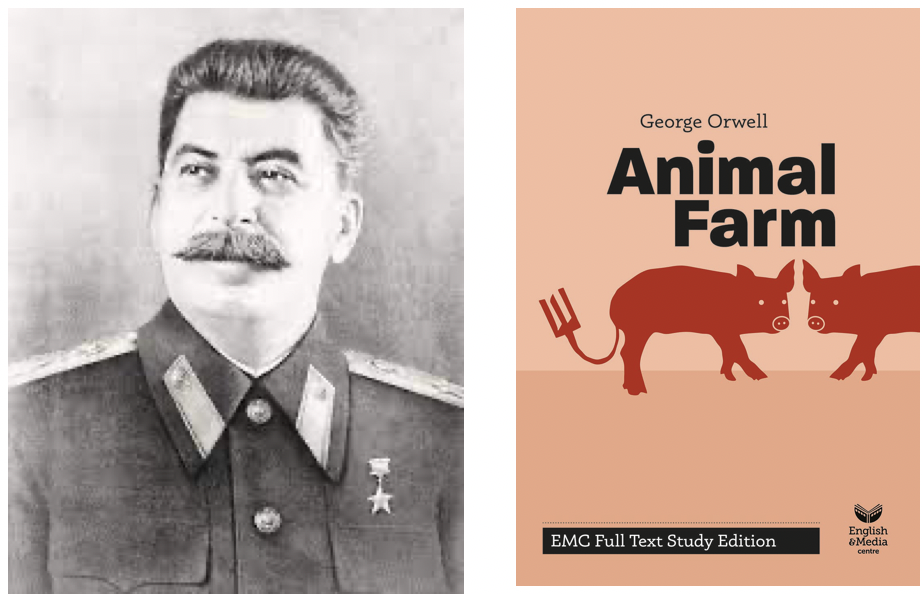 One of the great thrills of encountering Animal Farm for the first time is learning about its allegorical links to events around the Russian Revolution. Foregrounding these links for young readers when teaching Orwell’s classic, though, might not be the best way to help them to appreciate the overall significance of this novel. After all, allegorical links are deliberately designed to be hidden beneath the surface narrative, which has to stand on its own two feet as a piece of literature if it is to have any worth.

And stand on its own two feet, Animal Farm certainly does. With no knowledge of Russia at all, we can still appreciate Animal Farm’s power as a piece of dystopian fiction, its use of animals to represent broad features of human behaviour rather than specific historical events and its careful manipulation of the reader through moments of tension and plot revelation. An initial visceral response to these features in what is, all told, a pretty captivating story for young readers, might be blunted if it is overlaid too heavily right from the start with a potted history of events inspired by Marx and conducted by Lenin, Stalin and Trotsky.

Let’s take one moment from the novel to exemplify this thinking: the show trials in which various animals confess to crimes they did not commit and so face the death penalty. These fictionalised events are directly linked, allegorically, to Stalin’s show trials of the 1930s. Knowing this can, indeed, be revelatory for the reader. This kind of thing really happened? That’s insane! But would it be most helpful to know about this in detail before, during or after reading?

I’d argue that the latter is the more effective approach. Tell students in advance, or indeed alongside the reading, that this episode is an allegory for Stalin’s show trials then that becomes all that it is about. No thinking needed, just a mapping of a piece of knowledge on to the text.

But withhold the allegorical details and the surface events take on a broader significance. They can, for example, be about any or all of the following:

This is the stuff of literature and literary thinking, and with a broader allegorical relationship to our own times, not just to a single significant historical moment. It’s what helps the novel maintain its relevance year after year. Identifying points like these requires actively doing literature – reflecting, discussing, contesting, qualifying, re-evaluating, and so on. It involves generating knowledge rather than passively taking it in – what Harold Rosen referred to as ‘knowledge made, not given’.

The reality of teaching Animal Farm is that there are likely to be students in the classroom with some prior understanding of its allegorical meaning. In a way I’d argue that this makes it even more important not to foreground a highly precise historical/allegorical reading. These students, along with their classmates, need to approach the novel as a piece of literature and engage in possible interpretations as they would with any text. Why else would it be on an English curriculum nearly 80 years after first being published?

It’s worth being clear that I don’t want to downplay the significance of Animal Farm’s narrow historical/allegorical meaning, nor the desirability of exposing students to this reading. It’s an important part of a shared cultural heritage, knowledge that enables people to take part in wider conversations beyond the English classroom. Teaching the historical context that underpins an allegorical reading of Animal Farm before grappling with the surface novel itself, though, misses a trick. In a way it is too easy. It spoon-feeds knowledge to students and then expects them to map it on to what they go on to read, thus relegating the literary strength of the book to secondary importance. It privileges history over literature, which is surely not what we want or need in English classrooms.

If you’re interested in finding out more about this and other approaches to teaching Animal Farm, we’re running a course on Monday 9th May that draws on materials from EMC’s full text study edition.

Excellent. Really agree with this. By Faye on 20th Apr 2022
Thanks Faye! By Andrew McCallum on 20th Apr 2022
Agree wholeheartedly. Ideas need to grow FROM the text and shouldn't be a narrow imposition. Great article. By Pierrette Sims on 20th Apr 2022
Many thanks, Pierrette. Appreciated! By Andrew McCallum on 21st Apr 2022
Couldn't agree more - feels like, for a lot of teachers, the urge to foreground historical context is born out of anxiety about students not 'getting it' and how that would impact on them in exams, whereas letting them approach the novel itself first might well be the one thing that helps them care about and recall the historical context in an exam to begin with! By Maria Devlin on 04th May 2022
Thanks Maria - perfectly put! By Andrew McCallum on 05th May 2022
This is really interesting. Admittedly, I am the typical historical context front-loader. But I think that is mostly because I have only been an english teacher for two years, and that has been what I have been shown. I am about to mark my first batch of GCSE scripts this year, and what you said reminded me of something the lead examiner said. Moving forward I definitely want to try your method - give the students a chance to attribute their own takeaways - then later considering how historical events tie in. By Savarnah on 17th May 2022
Thanks for taking the time to comment, Savarnah. I'd be interested to know how you get on. I was recently passed on an essay written by a student who'd been taught in a way that foregrounded historical knowledge. It led to all kinds of distortions in their response, with what they'd been directly taught getting in the way of any authentic personal response - and often being reproduced in error. It certainly didn't read like a literature essay. By afm5454@gmail.com on 18th May 2022
Print Share