It’s good to talk – Changing practice in English: the start of something big

We decided to initiate a project on group work last year, led by myself and Kate Oliver. It’s something EMC has put its own money behind – so far we have no external funding, though that’s something we might look for in the coming months. Despite lack of funding, the time seemed right and we felt committed to doing something on it for a number of reasons: 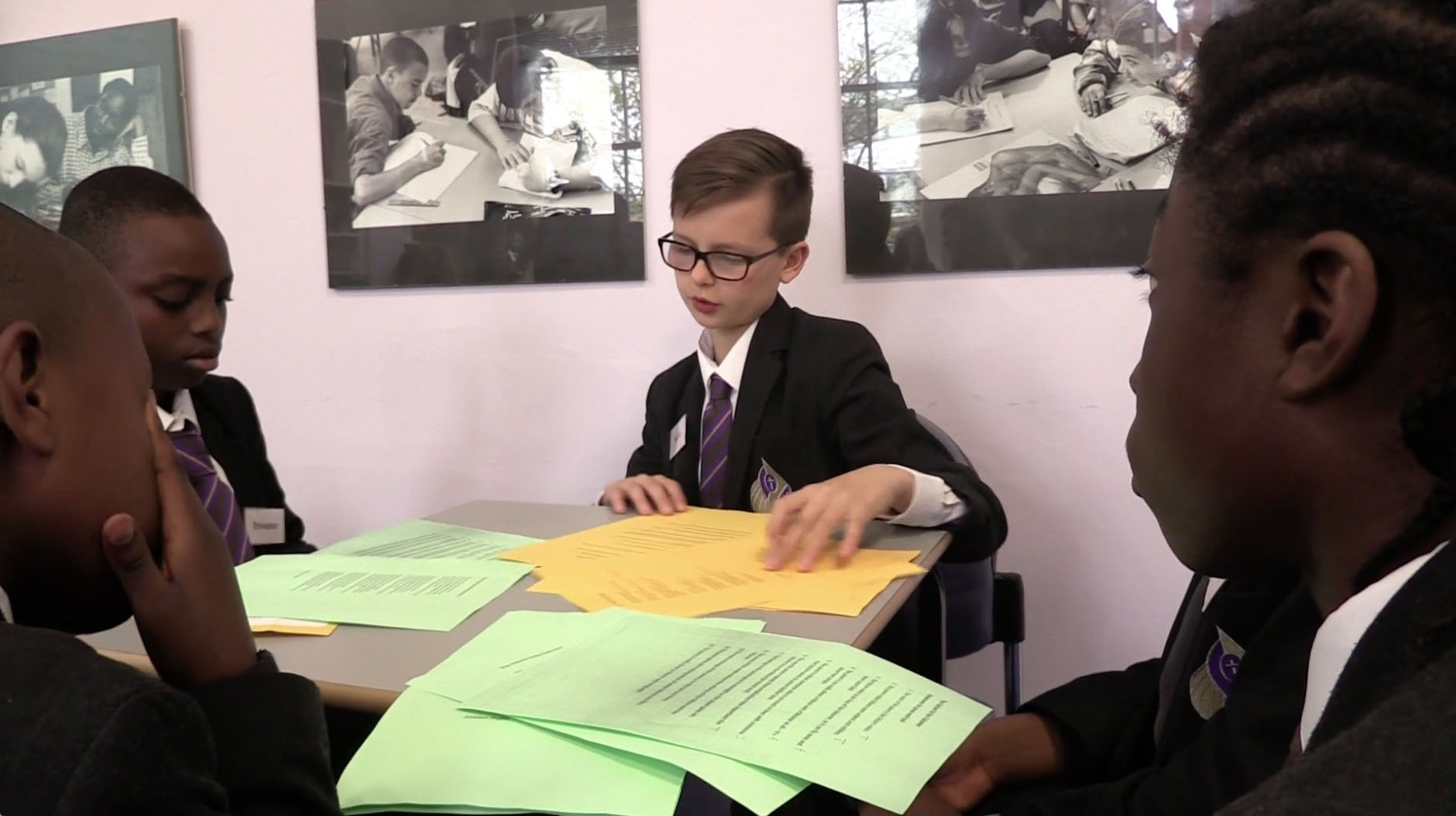 1. In our work in schools, we have seen group work being done a bit less frequently than in the past, and with more uncertainty about its value and less confidence about the constituents of what makes it successful.

2. We have observed that in discussions about education online and elsewhere, group work is being questioned as a valid classroom activity. For instance, David Didau, an influential blogger, wrote a provocative blog ‘Why (the hell) should students work in groups?’ Feb 11th 2015 http://www.learningspy.co.uk/featured/students-work-groups/ He followed it up with a few days later with a slightly more measured set of reflections ‘Should group work be imposed?’ but his conclusions were broadly similar – that group work is generally ineffective as a means of improving pupil talk and as a means of getting pupils to think in the subject.

I wholeheartedly agree that language is an essential component for learning. The more you speak and [sic] a subject the more you will have to think about that subject. And the better children can think, the better they are likely to learn. This was something I acknowledged in my original post. What I take issue with is the proposition that group work is the best way to get children to talk about a subject.

More recently, the free school in West London, Michaela, takes pride in saying on its teacher recruitment page, ‘We would never do group work at Michaela’. Teachers are firmly discouraged from applying if this is an approach that they wish to adopt. Michaela is promoting its view of education in increasingly public ways, soon publishing a book called ‘The Battle Hymn of the Tiger Teachers’.

3. We surveyed the material that exists to support group work, and while we found much of it of real value, we felt that some important questions weren’t being asked or answered, particularly in relation to our own subject, English. There is plenty of sound advice about setting up groups, establishing ground rules, giving students roles, structures for group work (such as jigsawing, home and expert groups and so on) but not much on what constitutes success in group work, how teachers should intervene in it, what group work is good for (and, conversely, what it isn’t good for), what it does that other classroom approaches can’t do, what kind of tasks work best.

4. In terms of CPD, there isn’t much visible evidence in the form of video clips of students working in groups, to allow teachers to analyse, debate and reflect on the basis of a shared ‘text’, in the same way that one might moderate a piece of writing for assessment and agree what constitutes success, or discuss how to improve it.  Equally, teachers in their own classrooms, find it hard to ‘capture’ exactly what’s going on, to pin it down and examine it more analytically.

So we set up a project, starting with a twilight session at which several teachers put themselves forward to be part of the project group. We set this up to be an open-ended project – with no finish time and no fixed parameters. We wanted to be guided by what we might discover, allowing the project findings to lead us, rather than setting out with a fixed agenda to prove a narrow set of hypotheses, tested on the basis of randomised controlled trials.  Too often, from our perspective, current educational research is constrained by the limited parameters of what can be measured and is more about seeking proof of something already envisioned than genuinely investigative. Two teachers volunteered to be part of the first phase of the project. The first phase would involve us going in to observe some group work in KS3 classes, followed by a class from each school coming to EMC to do group work for a whole day and be filmed doing it.

We got started and last term, two Year 7 classes from these schools, came to EMC. We filmed them working with their teachers and working with us. We emerged with 11 hours of footage that we then edited down to around 45 short video clips, showing group work in action.  So far, we have shown a few clips at a workshop at the NATE conference in June – with hugely positive and excited reactions from the people there – and have explored some of them as a staff group, with an equal measure of excitement.  Now we are beginning to share our early findings more widely, as well as taking the next steps to broaden our work, and extend our investigations.

So, what has emerged so far? A huge amount – too much to be able to put down on paper here. But I can, perhaps, make a start, by setting out the 10 key themes that we’ve identified as a result of our observations and work with the students:

2.    What’s the role of the teacher? In setting it up, in establishing the parameters and the purpose of the task, in pausing/re-directing, in building the framework for future learning

3.    Time allocated and pacing of activities

4.    The role of report-backs and whole class feedback

5.    What’s the right level of challenge in group work?

6.    What kinds of tasks work best in group work?

7.    What if students don’t seem to be making good progress all the time?

8.    The value of creative work in group work on texts

9.    The collaborative classroom – what insights group work offers into how and what children are learning. What students can tell teachers about their learning.

10.    Setting v mixed ability – does this make a difference to group work?

Already, our work has been throwing up interesting issues around these 10 themes. They are ones that we want to explore more fully with our project group, extending the range of classes and teachers with whom we test out the ideas. In a series of EMC blogs over the coming months, we’ll be sharing some of the insights we’re getting as the project develops.

In the meantime, here are just a few thoughts on the interrelationship between our overarching question – ‘Why do group work?’  and one of the sub- themes, ‘What is the right level of challenge in group work?’  It takes us straight back to the David Didau assertion that group work isn’t the best way of talking in the classroom and therefore nor is it the best way of thinking. And maybe it begins to answer some broader questions. Why do group work? Maybe because it’s particularly good for getting students to think hard about difficult things. If group work demands too little of pupils, because teachers feel impelled to look for signs of instant success – immediate proof of what’s been learnt – then perhaps that scope for talking and thinking becomes limited.

In the course of the work we did with one of Year 7 groups, we set up some activities which were particularly challenging. In one of the activities, for instance, they were presented with two very demanding poems they’d never seen before and were expected to compare them and report back on them. They had to grapple with the poems and their complexities, within a lightly supportive structure, but with no ‘direct instruction’.  We were hugely impressed by the quality of their response to that activity, as were their teachers. Our observations on the filming day were backed up by student questionnaires (both before and at the end of the day), student interviews to camera, and interviews with the teachers who led some activities themselves and observed their students in others.

One recurrent response from the students was that they particularly liked the level of challenge; they liked having to ‘think’ hard.  Unprompted, the word ‘think’ came up time and time again in their responses, both in the questionnaires and to camera. They liked having to think hard, to think out of the box, to talk and find out what they thought, to have to think for themselves rather than being told and so on. A Wordle of their responses would have the word think standing out by a mile.

In looking back at the video footage, we were ourselves struck by what we saw – students regulating themselves really well, in a group situation, to think harder by talking to each other. They seemed to learn both by bouncing ideas off each other, but also by using their own individual talk as a means of taking further and thinking through their own ideas.

In the report back by individuals, one could see the way in which their understanding of the poems and of poetry had benefitted. And it wasn’t just a question of ‘knowing’ more about the two poems for their own sake. One felt that having gone through that process of thinking about those two poems would stand them in very good stead when they had to encounter any poem in the future. Knowing how to think and talk about poetry was what they had been learning.

The tiny clip here shows some of that in action. It’s just one moment from a much bigger range of clips and a much broader venture. The project is just at its start, but it promises much in helping us to clarify what works best in group work. Hopefully, it will also help to re-assert the ways in which group work is not just a ‘take it or leave it’ part of our classroom repertoire but an absolutely vital element, without which students are likely to be seriously disadvantaged in their learning.

Eagerly following your findings - thank you!
By Rosemary McKisack on 03rd Oct 2016
All too often group work has been seen as an easy option both for teacher and students. However, what you are establishing is what I have found throughout my teaching career, it depends upon what attitude has been established. Teachers who have established themselves as 'the voice of God' and do not encourage individual exploration, blight students' potential. However, group work is integral to developing the ability to explore and where that freedom is present students flourish. By Jean Young on 26th Jan 2017
There is a lot more going on in the demonstration clip, than the discussion of poetry.
It was interesting to watch the way the camera was set up to focus on one student, and the body language and level of interest displayed by that student.
What an interesting clip! Thank you, for sharing it.
[NZ teacher]. By Di Harper on 22nd May 2017
Thank you for your positive response! It is interesting isn't it? In other examples across the class, we saw many other students equally engaged and thoughtful, coming up with different but equally sophisticated responses to the two poems that they then shared as a whole class. Others in his group also came to the fore at different moments. For us it demonstrates how, when the level of challenge is right, and the task – in this case weighing up statements – supports discussion and offers 'meaty' teacher input, the students can develop their thinking, their interpretation and their understanding of how texts work. As you say, the lesson, in this instance, happens to focus on poetry, but it is about much more than that! By Barbara Bleiman on 23rd May 2017
Print Share