National Poetry Day is coming up on Thursday 6th October. If you are wondering what to do with your students to celebrate, we have the full package for you: a selection of poems with visuals plus suggestions for classroom activities to go with them. 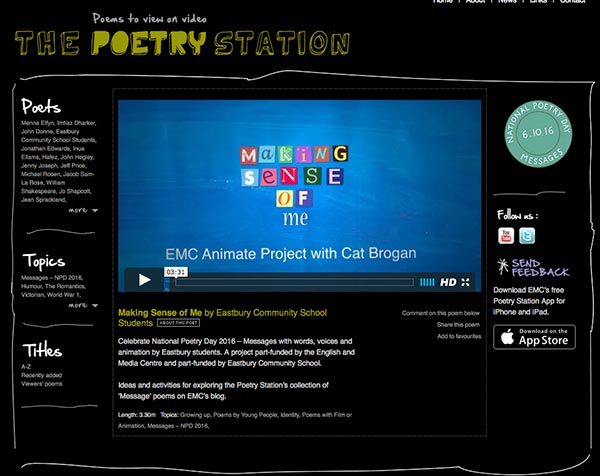 The poems are linked to this year's theme, messages, and are all available on EMC’s website ‘The Poetry Station’. This is a fantastic resource for teachers which includes music, film, and animation, as well as readings by actors and authors, from the unpublished world of slams, live events and song writing, to the published, literary and classic traditions of poetry.

On The Poetry Station’s National Poetry Day page you will find:

Barbara Bleiman, poetry enthusiast and one of EMC’s consultants, has put together some classroom ideas (below) around the Poetry Station selection to get your students engaging with the poems and having fun with them.

Write a message back to one of the poems.

Animals giving a message to each other

A message to the world

Blake’s poem ‘London’, has a strong political message about what kind of world he thinks he’s living in and what’s wrong with it. Blake’s London is not a place of equality or justice – it is full of problems. Maya Angelou’s poem ‘And still I rise’ is a powerful statement of political and personal ideas – a message to the world.

‘Please Mind the Gap’ takes an everyday public ‘message’ from the tube, or from train stations and gives it a much deeper message about the divisions in society.

Letters have gone out of fashion. Few people write them anymore. People tend to email or text or WhatsApp each other instead. But perhaps a letter allows you to say more, and say it with more care, than these other newer forms of communication.

Sorry no, sorry no,

I hope you understand

I hope you don’t mind,

If only I could

Unfortunately, as luck would have it,

By chance I find myself unable,

What a pity, what a shame

A group poem with a message – Animate!

KS3 students at Eastbury school in London, worked with a spoken word educator and a team of animators to write a group poem with a strong shared message. They then went on to make it into an animated film. Their ‘message’, ‘Making Sense of Me’ was all about developing the confidence to overcome hurdles and achieve your dream. Watch the poem and discuss your first reactions. Talk about the metaphors the pupils chose to express the idea of feeling low confidence and then breaking through that, and the visual images they created to go with the words. Which bits of the film did you like best? Which images, which words?

A: It’s great the way all of the lines start ‘I hate it when…’ but it’s a bit depressing.

B: How about having five or six lines at the end starting ‘But I love it when…’, so it ends more hopefully?

D: Let’s do that! And can we also do it more like the Eastbury poem, with more unusual images? Like, ‘I hate it when you go on and on, like a siren in a traffic jam.  I love it when you stop, and all the street is empty and still.’

Activity 2 – writing a poem of your own

Having watched the ‘Making Sense of Me’ video, you could have a go at writing a poem of your own, on any of the topics suggested in Activity 1, or another topic that you personally feel strongly about. You might want to write it as a message to yourself, or to parents, teachers or politicians, or other students.  Your message could be to a younger brother or sister, giving them advice and ideas about their life e.g. ‘When you start at secondary school…’ or ‘How to stay strong when things are worrying you…’