You may have seen press coverage recently of the 2019 Forward Prizes for Poetry. Our congratulations to Fiona Benson for Best Collection, Stephen Sexton for Best First Collection and Parwana Fayyaz for Best Single Poem. In conjunction with the main competition, EMC ran a shadowing competition for 16-19 year olds, inviting creative critical responses to some of the short-listed poems. Here Barbara Bleiman reflects on what the entries suggested about how young people respond to poetry. 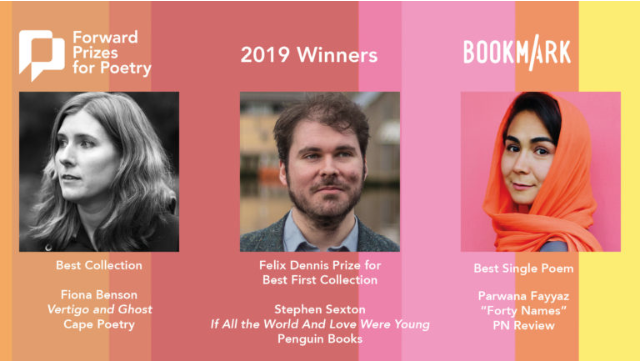 This year’s Forward/emagazine poetry competition for A Level students was a joy for those of us doing the judging! We decided for the first time this year to only offer a ‘creative critical’ response, abandoning the purely critical writing of past years. This came about because of what we saw in the entries from last year, where the creative critical work was of a significantly higher standard than the critical writing. Students who wrote a poem inspired by one of the Forward shortlisted poems ended up writing much better critical writing in their commentary than those who took a purely analytical approach.

In this year’s competition we had over 100 entries, from schools and colleges up and down the country –  comprehensives, grammar schools, independent schools, academies, sixth form colleges and FE colleges. There were multiple entries from schools but also many single students entered, clearly having been told about the competition and been encouraged to take part. One disappointment was the small number of boys sending in work – only 14 in total – but other than that it was a very full and varied entry.

The general standard of the poems written by the students, and the associated critical writing, was superb, far and away the best overall group of entries we have seen in the thirteen years since we started running a competition shadowing a major poetry prize (initially for the TS Eliot Prize and now for the Forward Prize).

The way that the students responded offers some strong pointers as to what English teachers might consider doing in the teaching of poetry (and literature more generally), to enable responses such as these.

What made this year’s entries so very different?

The implications of this seem to us to be profound. What we are discovering suggests that we should be teaching the analysis of poetry (and other texts too) in very different ways. It’s something we have believed for a long time but this evidence makes it all the more convincing.

The winning writing is here, along with that of the two runners-up. But we also thought it worth quoting extracts from a couple of those students who weren’t winners but who wrote really, really well, to give a sense of the quality of the entry as a whole.

The question Kaminsky’s poem seems to raise is the responsibility of ordinary people to stop catastrophic events on a national or global scale. Do we even have that power? If so, much guilt ought we to feel? The fractured structure and enjambement Kaminsky employs lends itself to the sense of fractured priorities and mindsets; we want to change the world but it’s so much easier to lie in bed or watch the sun, even as others suffer. […] I hoped to emulate this fractured structure in my own poem: feeling tiny and insignificant against huge, global problems, while the daily issues of domestic life can take on monolithic proportions.

Lyra Christie, Gosforth Academy (‘We lived happily during the war’)

Something else that impressed me was that although the poem accurately depicts the bleakness of watching a family member die, its imagery remains rich and beautiful throughout. The ordinary is made fantastical; the hospital’s ICUs become a chorus, the drive home purple and ice-glazed. Paradoxically, I found this to reinforce the mundanity of loss. The speaker tries to find something profound in their hardships, and beauty in their Mother’s final days. Whilst at first glance the poem can come across as rather dispassionate, repeat readings reveal its warmth. At is bare bones, it seems like an attempt, after the fact, to mythologise a loved one’s death – although the grim reality of things sometimes slipped through.

Full details of the winning collections and poems here.

Really interesting and encouraging! Great competition, though the numbers were strong this year, it's a pity more students don't give it a go. While I agree with your conclusions about teaching, it could be argued that these students are the exceptional ones and that less talented/ committed/ interested students would find creative engagement too challenging and being given choices bewildering. What less confident readers need is clear, consistent reading method and writing formula. No? By Neil Bowen on 29th Oct 2019
Interesting comments Neil but not ones that I agree with, I'm afraid, apart from your first point. Yes, wouldn't it be great to have lots more entries. The more the better. We publicise it widely, so perhaps you could suggest why none of your own students entered, to help us think of other ways of encouraging them?

On your other points:
Our winners & runners' up were all from state schools, as were all but one of the shortlisted entries. In among them were obviously able students but then so have been most of the entrants in previous years, who wrote far, far worse in their critical writing. What I'm pointing up is a significant improvement in the critical writing of the whole entry this year by ALL entrants, as compared with the entries by the critical writers of previous years. Usually, as judges, we sadly report that there's been a lot of very poor writing, from undoubtedly keen students. This was NOT the case this year.
On your broader question on 'too challenging' for less able A Level students (or younger ones) I'm afraid I have to disagree. We see evidence (as do examiners) of a 'writing formula' holding back all students. All Awarding Bodies advise against this constantly in their exam reports both for A Level and for GCSE. And from KS3 up, we have seen how both choice and creative engagement contribute to developing students' confidence in handling texts. See the blogs on the 'Teaching a Novel at KS3' project. Listen to the forthcoming video of the teachers who did that project talking about the way their less able students in a comprehensive in East London engaged with texts as a result of these kinds of approaches. By Barbara Bleiman on 29th Oct 2019
I was disappointed that none of my students entered, unlike in previous years. As I've mentioned elsewhere, for me the timing of the competition is a bit too tight. Either a deadline after half-term or a launch in the summer would be really helpful. That said, I'm hoping to have many entries next year.

Re, creative responses and student choice, I wasn't expressing my own views. I'm 100% believer in the value of both and make both an essential ingredient to the courses I teach at every key stage. In my opinion, writing frames can become straightjackets on thinking. However, I do think it's useful to offer some guidance to students particularly at the start of courses, though I favour a key ingredients rather than a recipe approach. By Neil Bowen on 29th Oct 2019
Yes, the end of Sept deadline is a shame but it can't be changed because of the Forward Award calendar. They very kindly shifted the dates as much as they could in order to give us as long as possible. But we did open the competition on 14th June, and announced it in the April issue of emagazine, in the hope that students might enjoy doing it in the summer term, after exams. I do hope to see some entries from your school next year! By Barbara Bleiman on 29th Oct 2019
Print Share

Posted about 9 hours ago