Over the past few days, there has been another big grammar storm in the news, on Twitter and other social media. 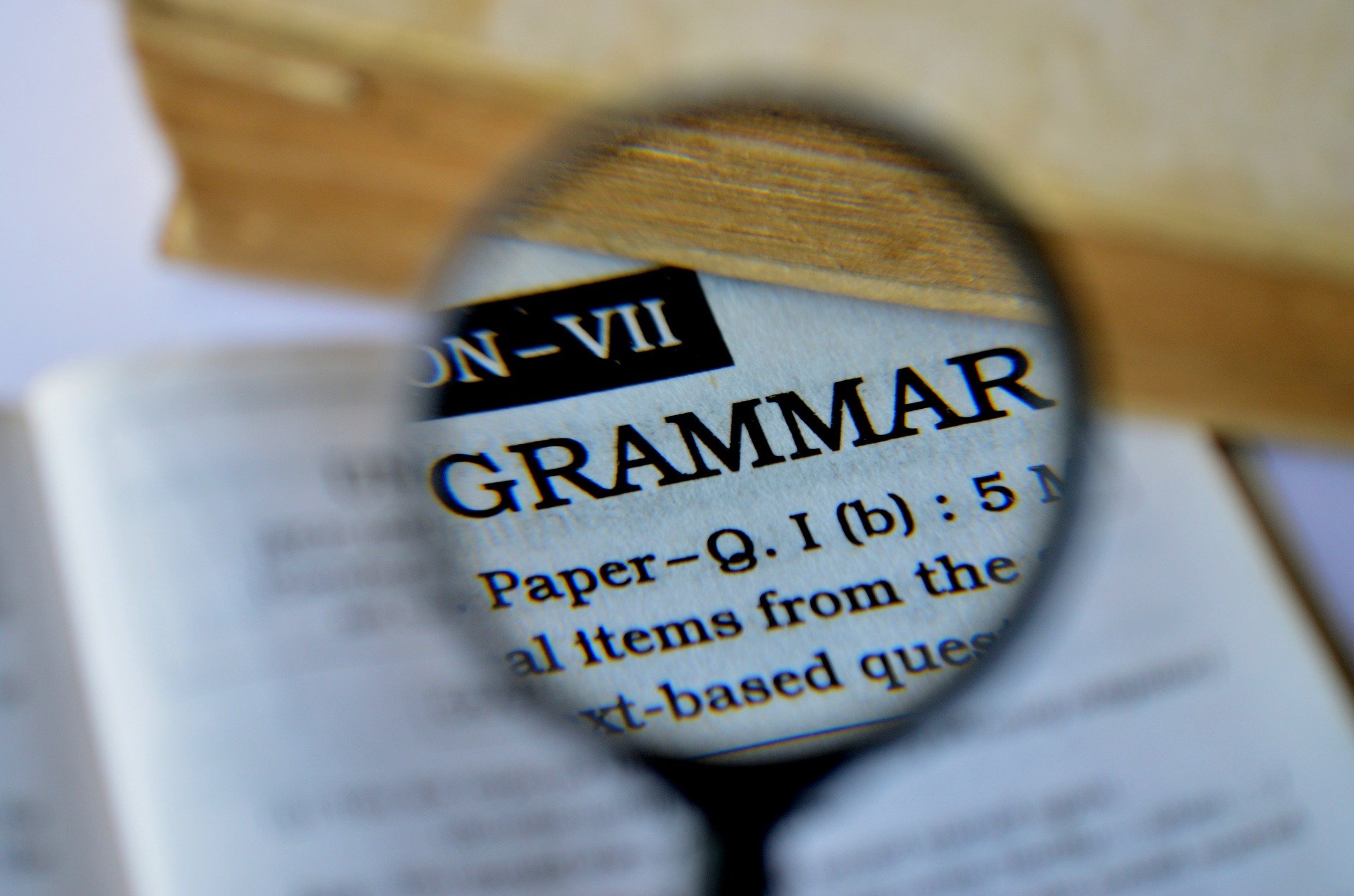 It seems to have been provoked, at this particular moment, by parents doing home schooling with their primary aged children and discovering just what the grammar requirements for KS2 mean. There’s been an outpouring of anger and incredulity at what children are faced with – the learning of terms, the labelling of examples, the testing of whether they can be applied to new ones. Quite justifiably, in our view, parents are shocked and outraged. Writers have also weighed in. For a long time, they have felt huge disquiet about what they’ve seen in the teaching of writing in schools, where the grammar curriculum and the requirement to test knowledge of terms has risked distorting writing development. This weekend, they too have forcefully expressed their concerns.

Now I would wholeheartedly agree with these concerns. For me, the expectations imposed on schools and teachers in terms of grammar teaching, via the list of grammatical terms and the SATs tests, are wrong in almost every respect. They come in the wrong form, they focus on the wrong things, they’re much too early in children’s development as writers and users of language and they’re not underpinned by an entitlement for all teachers to receive high quality, sustained CPD. As a result, they’re sometimes taught by teachers who themselves feel unconfident with grammar and uncertain about the ‘labelling’ itself. Now grammar is not ‘basic’ or ‘simple’. It’s not always clear cut and it’s not a set of rules that can be applied with ease. It’s fascinating and complex and of immense interest but when it gets shrunk to names, labels and tests, it risks becoming neither valid nor educational.  KS2 grammar, through no fault of the teachers who have been required to teach it in this way, has all too often become time consuming, stultifying, boring and associated entirely with right/wrong answers and the anxiety for both teachers and students of a high stakes test at the end.

The problem is that for many of us who are really interested in language, and language teaching (and that includes linguists, writers, teachers, teacher educators and parents), what we see in the current requirements for KS2 is giving all grammar teaching a bad name.  And there are many of us, in all of these groups, who do think that grammar can be taught in ways that can both excite and engage children, to spark their thinking and imagination and inspire in them a real interest in the way language works.

Grammar can be taught at KS2, as well as at KS3, 4 and 5, in ways that generate explicit thinking about what is implicitly understood. Children can investigate its use in their own language, in the language around them and in that of literary and other texts. They can, for instance, invent new languages (and create their own grammatical rules that get them thinking about how their own language works). They can read stories or poems and think about what choices writers have made, and why. They can think about their own writing and the choices available to them. What if you switched from active to passive voice, for instance? What if you changed the word order? What if you imitated the sentence structure of that fairy tale you’ve just read? What if you re-wrote that story for a younger or older audience, changing the syntax to suit it? What did you have to change to make this work and why?

None of these kinds of approaches necessarily involves learning lots of terms for isolated grammatical features. One could offer them – no reason why not to – but the terms aren’t the point. Labelling isn’t the point. Rules aren’t the point. The point is to think, observe, get interested in, consider choices, reflect on how language works, try things out, experiment, be keen to know more.

Given this, it seems important that when we criticise, we do so carefully and make sure that we explain the complexities rather than blasting out the crude message that grammar teaching is awful full stop. We don’t want what’s there now, that’s clear –  we want something an awful lot better! In this spirit I put out this plea on Twitter on the weekend. It was addressed to writers, but in fact it might apply to anyone. I’m pleased to say it had really good feedback, with teachers, linguists and many others retweeting and liking it. It’s a kind of manifesto if you like and I hope it can help frame our public conversations and build a consensus for change.

2. Don't say 'I don't know this, so why should children?' That's not the best argument. There are lots of things we don’t know that we are glad students are learning. Really rich knowledge about grammar is one of these things (not labelling and naming for their own sake.)

3. Do argue, as you do, against teachers demanding that students paste structures (e.g. fronted adverbials, more adjectives and so on) into writing to supposedly improve it. The effect of this kind of approach on writing has been truly awful.

4. Do shout about the issue of age-appropriateness. 8-11 year olds are discovering about themselves as writers. That's a seed that needs nurturing carefully to help it grow, rather  than squashing it flat under a pile of grammar bricks.

5. Do argue for great grammar teaching which is about attentiveness to the 'choices' made by writers & the 'choices' you can make in your own writing - not fixed rules. Grammar taught in the context of reading and own writing has huge potential. Grammar taught as ‘label, name and test’ is time-consuming, stultifying and, all too often, wrong, for a whole host of reasons, not least of all lack of teacher CPD.

6. Do acknowledge and proclaim loudly that teachers are doing their best to teach grammar in the context of requirements for tests, accountability & a whole structure of thinking that is all wrong. Show your appreciation for them – while expressing your fury for what they have to do and the effects it is having.

A good place to start is the LINC project and the resources that followed . On my shelves is the KS3 CATS consortium teaching resources which made knowledge about language explicit and wouldn’t it but helpful if we could revisit that material in the context of the the current accountability requirements
I feel a new EMC publication might just do the trick!!
By Kevin Morris on 04th Feb 2021
I could not question your intentions, knowledge, expertise and passion for the English language. I have been following your work for a long time and I applaud your contribution to British Education, and Literacy. However, what I would question is your perspective.
Not teaching grammar explicitly is unimaginable to anyone living on the other side of the English Channel. I should know since I grew up there. I learnt the distinction subject verb object when I was six...like everyone else. The so called "recondite" terminology I had easily digested before I moved on to Y5...like everyone else. Children have absolutely no issue absorbing these terms, no more than a child learning maths would have any trouble learning about Tier 3 terms. I recently went through the words carnivore, omnivore, amphibian, invertebrate etc whilst home-schooling my son who is in Year 1. No one, as far as I am aware, has been complaining about these complex words. Why not? The answer is simple: grammar is stigmatised. Very few teachers have received training in Linguistics or grammar. I wholly disagree with Ian Cushing about the prescriptive approach of our teachers simply because most would not know what prescriptive means, by no fault of their own. In countries where language is morphologically much heavier, teaching grammar explicitly is a no brainer. Pupils with a firm grasp of grammar learn how to read better (see Maryanne Wolf).
The argument that many award winning writers have never learnt grammar is fallacious. They did learn grammar but implicitly, through their voracious appetite for books. Here is the thing though: not many people read that much. Yet, many people learning English as a foreign language (and who have learnt it grammatically) can write it very well and very accurately (within the context of SE) before they can speak the language fluently. How do you explain this? The fact is, grammar is a great catalyst. The "in context" argument is also nonsensical because it is entirely predicated on the educational need, the stage in the pupil's education and on the pupil's own perception and experience of grammar. Pupils in KS3 would evidently find grammar rebarbative and overwhelming if they had never experienced it before. It would be a valuable help if they had learnt and used it from an early age. It is a matter of cognitive overload. Of course, grammar should always be linked to meaning, but it does not mean there is anything wrong assessing pupils on terminologies. Grammar cannot be used didactically until people are familiar with the jargon.
As for the politics: I learnt and used the grammatical terms you describe as "too much" under the Mitterrand years, in a socialist era. I am no fan of this government, trust me. However, I welcome many of the reforms regarding the primary school syllabus. The teaching of phonics for instance got a lot of push back and this stemmed purely from a political impetus, not a scientific or logical one. All the evidence is there (See CastIe, Rastle, Nation et al). I believe that it was the same with grammar. I remember Dr Mary Bousted auguring a generation of brain dead children... Here is a knock down argument for you: French students have, for many decades, learnt grammar in a way which would be described as "prescriptive" by most British linguists (particularly in the field of sociolinguistics). Which country has won more Nobel Prizes in Literature than any other nation? I'll let you guess. As a Frenchman, I am not being deliberately patriotic but I wanted to show that linking explicit grammar to a lack of creativity is a complete non sequitur. Educators are quite fond of analogies so I would offer one. Grammar is like oxygen. For life conditions to be optimal, too much or too little can kill; it depends on the type of linguistic (or floral/vegetative) environment you are aiming to create. As a child, I did lots of grammar (starting with learning verb endings by rote, alongside my times tables). In college, it was hardly ever mentioned. In University, I re-discovered through Chomskyan linguistics and it was fascinating. Grammar as it is taught in primary is not perfect but it is still much better than not teaching it. It needs al the help it can get.
I wish talented and influential people such as you or the great Michael Rosen gave it a better name. By David Voisin on 05th Feb 2021
Thank you for your comment offering a perspective from another country, David. Your education system differs very much from our own and I'm sure that in your context, with a long history of a very different approach, the issues are also somewhat different. I would stress that I'm not arguing against grammar teaching. It's a question of how much, in what way, with what age group and with what support for teachers. My own experience in education coupled with the views of most linguists and the research evidence from the limited studies on this, lead me to my conclusions, though I know not everyone will agree. By Barbara Bleiman on 06th Feb 2021
Print Share