What can asking for a biscuit teach us about language in secondary English classrooms?

Barbara Bleiman draws on her insights into how her grandson is learning language to reflect on what this might mean for language learning in secondary English classrooms. 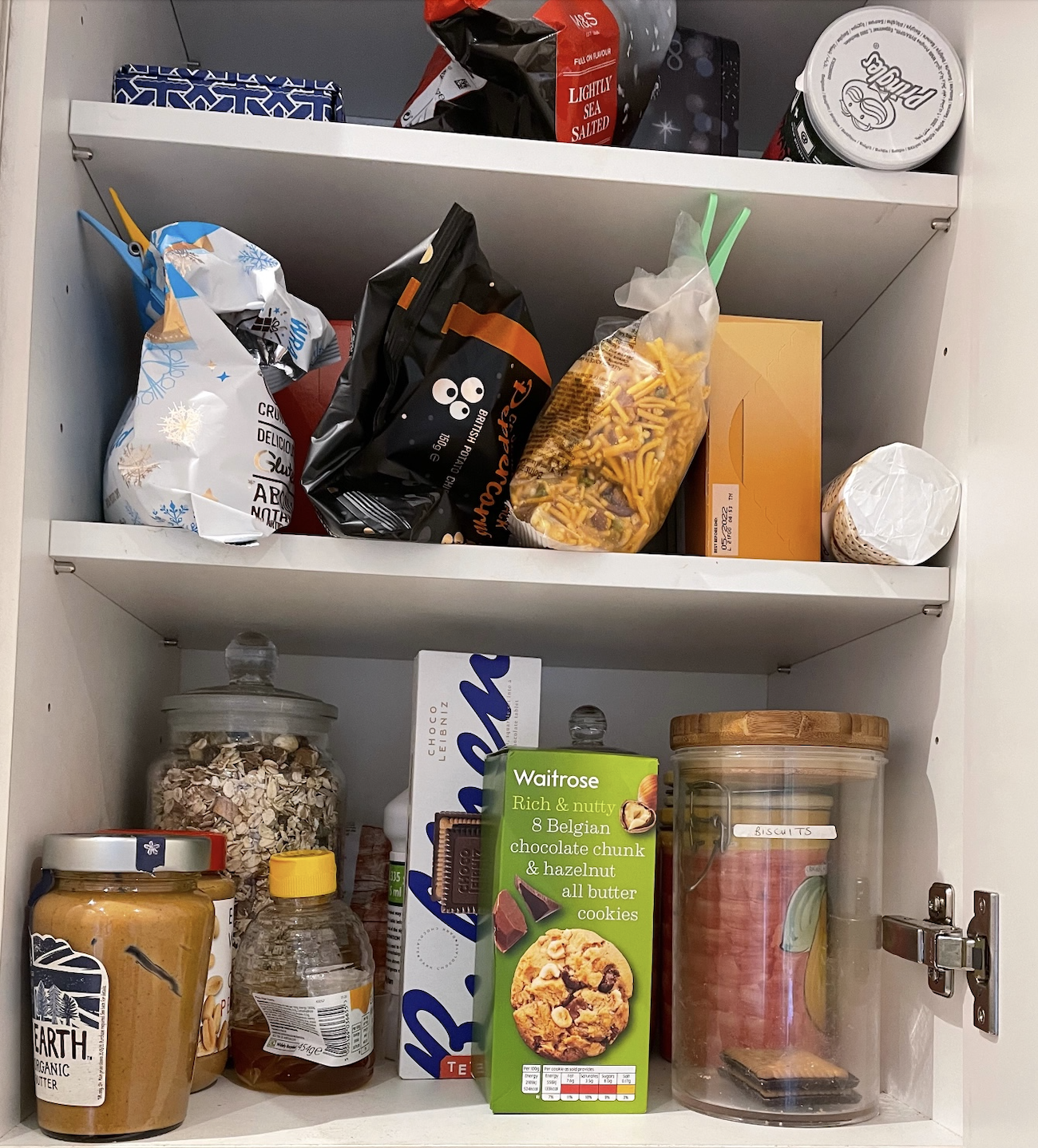 ‘I want to see where the biscuits are.’

This is my grandson, Max. He’s a couple of months short of three. He knows where the biscuits are. They’re in the same high cupboard where they’ve always been.

‘It’s dinner time. You need to eat your dinner. You can’t have a biscuit now.’

‘I want to see where the biscuits are. I don’t want to eat a biscuit.’

I take him to the cupboard and open the door. There they are.

He is satisfied with this and wanders off to his high chair to eat his dinner. He’s staked them out for later, and staked a claim to one, making his intentions very clear to me. I know eating a biscuit is firmly on his agenda for later. Job done.

This is a bit different from the exchange a week or so ago, when he said, ‘I need a biscuit.’ Not ‘want’ but ‘need’. The urgency of the request was clear. Different too from the observation he made at a café when, strangely, we found ourselves at a table next to Channel 4’s Cathy Newman and a colleague of hers, on Exmouth Market, when Max proclaimed very loudly and in their hearing, ‘I’m interested in those.’  His eyes were fixed on a packet of biscuits on their table. It differs also from the time when he simply said in an affronted voice, ‘Grandpa, what are you doing?’ when my husband started to eat his own half of the chocolate brownie that he’d agreed to split with Max. Max was very keen to have more than his fair share.

None of this was ‘I want that biscuit!’. It wasn’t an exercise in naming either – ‘biscuit’, ‘brownie’, ‘gingerbread’ or anything as simple as that. It was the complex set of pragmatic choices that we all make when we want to express wishes and desires and we try to persuade someone else to make them possible. The decision to express his desires in the way he did came from a very rich set of burgeoning understandings about how we couch our wishes and what is most likely to get a good response to these requests. So there were no actual requests or demands – no imperatives. The adults are expected to infer from what he says that he’s asking for one. This is the start of something very big and important in my view. And it’s just as important as the individual words he’s learning, say for brontosaurus or giraffe or the colour turquoise. These new words are of course important too – they’re the bricks to build the house, but they’re not the mortar, they’re not the walls, nor the windows or the timbers and roof tiles, nor the bigger structural frame. For me, Max’s vocabulary learning, as with all children, is astonishing, but even more astonishing is his acquisition of other things, such as the pragmatic understandings I’ve talked about so far.

There are others too. He’s learning idiomatic language, from listening to the adults around him. So, he’s started using ‘Actually’ as (dare I say it) a fronted adverbial. And he uses it in a way that makes perfect sense. And he’s picked up some phrases he likes. I once told him we’d have to ‘make a dash for it’ from the park to home, if it started to rain. ‘What’s ‘make a dash for it?’ he asked. I explained and now there’s nothing he likes more than bringing that into the conversation. Again, the idioms he’s learning aren’t using fancy words ‘Let’s set off!’ ‘Have a nice day!’ and so on are every day, commonplace monosyllabic words, but they allow him to enter the world of adult conversation and make a contribution that sounds just right.

Of course, watching this learning gives me great pleasure. But it also has a vital connection with the work I do on English teaching at secondary level. I’m writing about this, to share some of what I’m learning from witnessing early language learning and putting it alongside my thinking about language learning for secondary age pupils.

So, what does all this say to me about later language learning and literacy? Well, it signals to me strongly that we shouldn’t be putting all our efforts into vocabulary at the expense of other things. The implicatures (things that are implied) and inferences we take from the implicatures in others’ communication, are vital for written text comprehension as well as spoken understanding. And, though with a very long journey to go, Max is learning how to make the kind of inferences from what others say that will stand him in very good stead when reading for meaning in texts at a later stage. We need to pay attention to these aspects of learning and one key way to do this is to foreground talk in classrooms. High quality dialogic episodes allow teachers to tease out the possible meanings in literary texts which are, by their very nature, highly pragmatic and context-bound in their uses of language. You can understand every single word in Raymond Carver’s short story ‘Little Things’ without understanding anything about what’s at stake in the story. Dickens’ A Christmas Carol starts with the simplest of words – ‘Marley was dead: to begin with.’  By teasing out the implications and what you are expected to make of what’s said, in dialogue, you can reveal to students how much is there in the sub-text – what’s behind the words themselves.

Individual words are, also, only part of semantics. As one can see from my earlier example, ‘make a dash for it’ is a whole phrase. It means something different from the phrase ‘just a dash of sauce’, as Max will find out one day. Older students reading texts with idiomatic phrases in them aren’t helped, in every instance, by understanding the individual words. They need to have either encountered those whole phrases in other contexts, or they need to be able to pick up on the contextual cues and clues to interpret and generate possible meanings.

Equally, as I’ve seen with Max, it is possible for a language learner to begin to adopt adult discourse through a combination of encouraging questioning, raising interest in language and offering risk-free opportunities for trying things out. When Max makes a virtuous error (for instance, adopting the -ed pattern for the past of an irregular verb like ‘take’) there’s no-one telling him, ‘You got that wrong.’ Instead, supportive repetition of the correct formulation seems to work well, for instance:

No-one is judging him, apart from in the most positive ways, taking pleasure at hearing his efforts. Judgement isn’t the issue. Talk, support and modelling are key strategies for him and I’d say the same should also be true later on.

And as the first exchange with Max shows, where he was asking to see the biscuits, the to and fro of conversation is at the heart of his language learning and should be at the heart of language learning later on as well. In the ‘serve and return’ of conversation, Max has started having to explain his thoughts. He was saying what he meant, unpicking the meaning for me. ‘My request to see the biscuits didn’t mean that I wanted one. It just meant that I was making sure I knew where they were and indicating to you that they were in my mind. It was a way of me putting them into your mind too.’ This is what I take from his words.  In secondary classrooms, where texts are discussed, students need to be given the space to verbalise their thinking, at a much more sophisticated level, but in very much the same way. ‘What did you mean by…?’ opens up opportunities to explain their ideas, not just to the teacher or to the class but to themselves as well. Talking aloud is thinking aloud. Conversation is teasing out and clarifying meanings, offering implied meanings and then clarifying and developing them.

This is not an argument for abandoning any kind of planned curriculum or having acres of time given over to loose, unstructured talk. But it is an argument for making spaces for dialogic episodes, for learning by doing and experimenting with language, for learning in an environment that is free of the fear of getting things wrong. It is also a very strong argument for seeing language learning as being a highly complex web of interconnected elements that need teaching in context, not a simple focus on a single element like vocabulary, with little interest in the other equally important aspects.