'The way children are taught to read tells them what adults think literacy is' said Margaret Meek Spencer in 'Learning to Read'. Her books on the subject of children's reading are still among the most influential in the field. Chair of EMC Trustees, John Hickman, pays tribute. 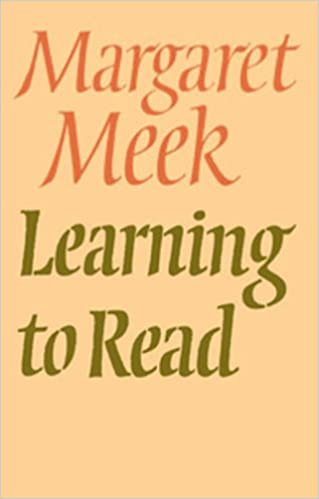 I first met Margaret Spencer in 1979 when, in those halcyon days of LA secondments, I was given a place on the 'Role of Language in Education' (“RoLE”) course at London’s Institute of Education. This diploma was Margaret’s brainchild and was the only Institute course at that time to be wholly assessed by coursework. We were told that she had waited until the very end of a dry academic board meeting when everyone was aching to go home before she slipped her proposal through without discussion. Hundreds of teachers over the years benefited hugely from this gently subversive act that epitomised Margaret’s quiet determination and iron-clad idealism.

Those of us fortunate to be a part of this diploma group were in constant awe of her intellect and her knowledge and were held spell-bound as she cajoled us through difficult texts, encouraged us to think beyond our classroom experiences and teased from us ideas that were often a revelation. Everyone will always remember the question with which she would frequently challenge an under-developed thought: 'what if the opposite were true?'  This – rooted in her philosophical background – was always delivered with that characteristically mischievous glint in her eye and genuine encouragement in her voice.

She was the consummate educator: never telling or lecturing but constantly easing her students towards their own understandings through conversation, discussion and razor-sharp questioning alongside a flow of academic references. She was deeply interested in our school-based experiences and never lost her enthusiasm for developing her own learning. A typical incident from that year happened one morning when I went along to meet her in her study where, in preparing for the day, she was sitting at her desk reading Vygotsky’s Thought and Language... and laughing to herself.  Slightly disconcerted, I asked what it was that she found so amusing and, without hesitation, she said simply – 'they actually pay me to read this stuff!'

She was a pioneer in the world of reading development and children’s literature with hugely influential texts like Learning to Read and The Cool Web remaining a constant presence on many PGCE courses. Her unique impact lives on in the work of thousands of teachers across the world as her ideas continue to be a force for good in a field that is increasingly threatened by ill-informed politicians and charlatans.

I know that, without Margaret’s influence, my career could easily have taken a different – less rewarding – path and this is, no doubt, true of many others. She generated huge professional respect as well as genuine affection from all those with whom she came into contact. Despite the accolades and the admiration, she was never pompous or condescending and was always prepared to respond to requests from both schools and LAs to share her vast expertise in whatever way was needed.   'Inspirational' is an over-used word but, without doubt, it is one that resonates in many collective memories of Margaret and she inspired not just through her erudition and her wisdom  but also because of so many other qualities noted by people who knew her well: 'encouraging', 'supportive', 'warm' and 'gentle' are just a few. She was a remarkable woman and a truly inspirational teacher.

One final, personal anecdote perhaps sums up the impact she had on me: during my year on the RoLE course, I would often meet up with members of my department and I no doubt fell into the habit of recounting something that Margaret had said or recommending an article she’d written or suggesting a book she’d mentioned. This became a running joke to the extent that – on my return to school – in my classroom I found a sweat shirt waiting for me with the words 'I love Margaret Spencer' emblazoned on its front. I wore it with pride then and I still have it today.

Read more about Margaret Meek Spencer in 'The Guardian' obituary.

A wonderful tribute, John. May I send to M's daughter and son? I did my MA at the I of E in 1975-77. We kept in contact since then. Everything good that has happened for me in my professional life has come as a result of her kindness and generosity. I love the story of her being given a tee shirt with the "suppose the opposite were true" on it. She said "OH, how lovely: I shall wear that to church"! Warm good wishes. By colin mills on 03rd Jun 2020
What an amazing year the ROLE course was for those of us fortunate to have been a part of it. Wonderful Margaret, thank you. By Barbara Rushton on 04th Jun 2020
Print Share