Sue Dymoke, an ex-English teacher, is a published poet, university lecturer in Education and international expert on the teaching of poetry. She has worked with many of the key poetry organisations in the UK, such as the Poetry Archive and the Poetry Society and has done international research. We are delighted that she has agreed to write this guest blog for the English and Media Centre. 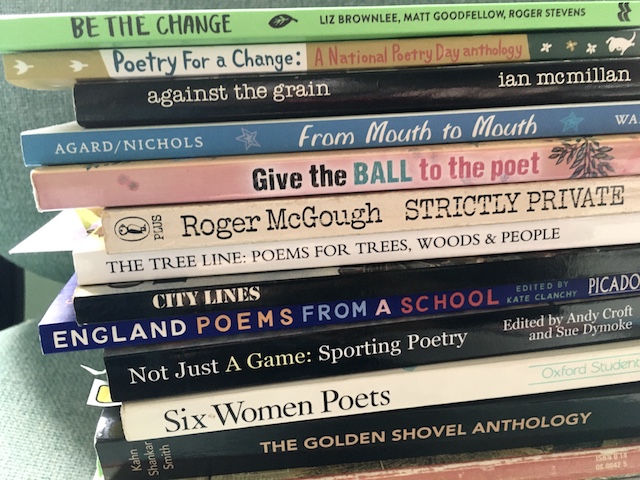 Earlier this year I gave a lecture on ‘Thinking and writing: students, creativity and poetry’ at an English teachers’ creativity conference. I spoke about shared creative practices, including the need for teachers and students to read, listen and view a wide range of poetry. I argued that, in doing so they will inform their critical perspectives about poetry and widen their awareness about the kinds of poems that they might want to write about and to write or perform themselves. Ownership of learning is a vital element in this process. I have written on many occasions about how young poetry writers can develop their craft if they are given increasing autonomy in choices of subject, form, voice and language. Alongside this, young readers develop their criticality if they are able to experience the wide range of possibilities with poetry, to make their own selections and thus to listen to and view poetry as more than the study of a selection of single texts in a school anthology.

My key message for all readers, including students and teachers, is that they should be allowed to take a precious, quiet moment to think whenever they see or hear a new poem for the first time - it can only ever happen once. Sadly this moment of reflection can be neglected in the anxiety to begin an activity. When this happens, a poem can be set ablaze with highlighting or contorted by acronym-related annotations. The space around the poem can not only becomes squeezed but, more importantly, the reader and the ‘new’ poem move on to a new stage in their relationship.

Beyond the set anthology

Within the study of an examination anthology, for example at GCSE or A level, the single poem can all too quickly be put into harness with other poems in the same anthology. It may well have thematic connections with these poems but it might have no direct relationship with them beyond their inclusion in the same text. While this ‘new’ connection could lead to interesting juxtapositions and comparisons, before the students become exhausted by such processes, it often ignores the fact that a single poem – whether it be Robert Browning’s ‘My Last Duchess’ or ‘Tissue’ by Imtiaz Dharker – is part of a wider body of work written by that poet at a particular time. As one might expect, it could be constructive, at some point in discussion of the poem, to consider where it sits within a specific poet’s body of work, in terms of themes, style, viewpoints explored by the poet. However, I think it is equally important to think about why the poem has been selected for inclusion in the anthology. Opening students’ eyes to the deliberately constructed nature of anthologies can be an empowering process which enables them to think about ‘when the choices got made’ (Liz Lochhead, 1984: 153). It could lead on to investigations of a number of questions about an anthology’s purpose, design and structure including:

Questions 8) – 11) are perhaps the most significant here as they could provoke productive critical discussions around the choices made by editors and publishers and what these decisions reveal about the nature of the text. Many published anthologies - but not so many examination anthologies - contain an introduction which explains the book’s purpose, how the text has been organised or the rationale for certain inclusions. It could be useful for students to choose and critically contrast two potentially similar anthologies to understand how they present their selections. For example, the brief introduction in City Lines, a ground-breaking anthology published by the English Centre in 1982 and edited by Michael Simons, Mike Raleigh and Paul Ashton, explains why some of the London school students’ poems are accompanied with comments from their authors and states the intention behind the choice of photographs. Interestingly, all the poems have equal status in this introduction. No indication is given of who won the competition: the editors focus on the range of work submitted and the writers’ feelings that ‘poetry was a good way of sharing their ideas with other people’. In a more recent, and equally significant anthology, England: Poems from A School, editor and writer in residence, Kate Clanchy, introduces some of the students whose poems she has included through a description of the ethnically mixed context in which they write, a context where poetry is for everyone and nurtured as Oxford Spires Academy’s ‘top sport’ (Clanchy, 2018, p.xv). 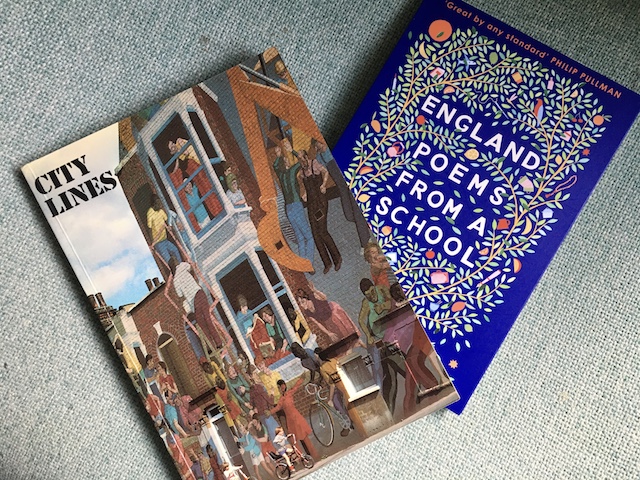 In exploring how their anthology is constructed, students should be encouraged to widen what I would like to call their poetryscopes, to browse extensively in libraries and digital archives. They should argue over how they might edit or rearrange the classroom anthology that they are studying as well as to discuss what additional material might serve to deepen their understanding of poetry. Aspects they could focus on as an editorial group might be:

Assembling a group collection of lyrics, spoken word pieces, recordings, visual and printed texts, including their own creative or re-creative work, could enhance their critical engagement as well as to heighten their awareness of intertextuality. An additional element of this process could involve searching for a draft manuscript composed by one of the poets in their anthology. Not only might this provide further insights into a poet’s writing processes, but it would also enable the students to get closer to a writer as an individual, rather than someone distant whose work lays in wait for them on an examination paper. Draft material is increasingly available for private study purposes through digital archives like The First World War Poetry Digital Archive  or the Harry Ransom Centre manuscripts. In Drafting and Assessing Poetry (Dymoke, 2003) I explore draft versions of poems such as 'Adlestrop' by Edward Thomas and interview contemporary poets including Moniza Alvi, Jackie Kay and Ian McMillan about how they draft.

The audience’s response to my lecture was heartening. Many colleagues seemed excited to explore the advantages of wider critical poetry reading, and promptly began to share ideas with other staff at the conference about how they might make space for this in their curricula at KS3, KS4 or Post-16 level. I pointed them to an article I had written for the Poetry Society some years previously on Reading and Making Anthologies. This offers practical advice for KS2-4 teachers but is eminently adaptable and available. Afterwards, however, I began to ask myself why making anthologies became such a key element of my pedagogy and how it has developed through experiences as a reader, teacher, poet, editor and researcher. I think it stems from an immersion in poetry at infant school where welfare ladies read to us from huge anthologies during wet playtimes, from my first discovery of Louis Untermeyer’s The Golden Treasury of Verse and a gradual realisation of the difference between this book and single author collections like Walter De La Mare’s Peacock Pie.

Many moons ago, when I was a PGCE English student at the University of Nottingham, our first major task was to compile a personal poetry anthology to use in our teaching.  In creating this I drew on some poems from a wide range of sources such including The Penguin Book of Contemporary British Poetry (edited by Blake Morrison and Andrew Motion). This anthology was the first book I had bought once Finals were over. It opened a door for me to many new writers whose single author collections I would go on to read or whom I would hear performing. This was where I first encountered Carol Rumens’ defiant yet haunting explorations of a father-daughter relationship in ‘A Poem for Chessmen’. Craig Raine’s ‘A Martian Sends a Postcard Home’ quickly became one of my essential classroom poems for encouraging young writers to experiment with metaphor and capture the mystery of the familiar. The PGCE anthology activity helped to put poetry firmly at the centre in those difficult early days of teaching and established a store that has been expanding ever since. Indirectly, it led me, as a Head of English, to compile book boxes of carefully chosen anthologies and single collections for classroom use and to invite anthologist, Anne Harvey, in to school to work with a Year 9 class as they created their own themed collections. Since moving into teacher education, I have always encouraged new PGCE students to go beyond knowledge of the poems they had studied at GCSE or A level and to seek out poetry for themselves. In an early session of the course they are asked to share their discoveries, linked to that year’s National Poetry Day theme, with their fellow students and to decide on a small joint selection of poems to teach. They also set up My Archive collections of poets’ recordings that they can use in their classrooms. My thinking about anthologies has been enlivened by many conversations with Julie Blake, whose fascinating, and now completed, doctoral work focuses on the nature of school anthologies and the selections of single poems taught at GCSE level. Additionally, her work with the relaunched Poetry by Heart competition contributes to a rich, varied poetry banquet that we should all want to feast on.

In creating and deconstructing anthologies, students can deepen their critical engagement with poetry. I hope this will lead them, and their teachers, to ask searching questions about anthologies, single poems, single-authored collections and the value of studying the genre. If they do so, poetry, its readers and writers will definitely be the winners.

Morrison, B. and Motion, A. (eds) (1983)The Penguin Book of Contemporary British Poetry. London: Penguin.

I have found this interesting reading even though I am not teaching in a school and left school many years ago now. I am attending W.E.A. courses though and think that the exercises here are relevant to adults as well as secondary school pupils. There is a useful list of anthologies, many of which were unknown to me and I have down-loaded the list. I think that the comments about a mechanistic model of teaching literature mirrored the situation in my own school-days. I happened to like books, having been encouraged by my parents from early days, but it was quite obvious that the English lessons were geared towards passing G.C.E. and most of the people were bored and reading the set books under protest with no intention of reading any of this type of book after school. I remember being told that the idea of people of school age expressing an opinion about what they were reading was ridiculous and that if an opinion was asked for in an exam question we should quote whatever view had been expressed by the teacher in class. English literature (prose as well as poems) was about a body of work to be done and whether we enjoyed it or not was irrelevant.
By David Hunter on 01st Dec 2019
Print Share