Creating as Well as Thinking in Group Work

Barbara Bleiman continues her series of blogs on findings from our group work project. 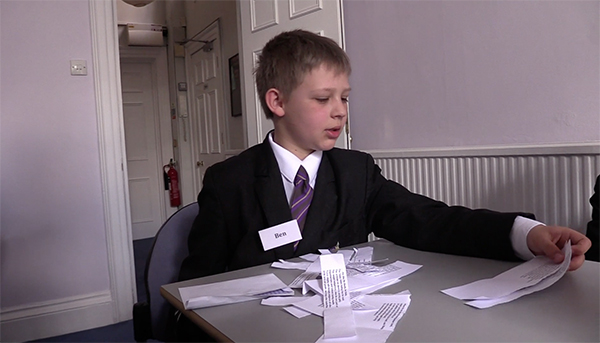 Previous blogs in this series have concentrated on the value of group work for grappling with difficult texts –  on talking to help you think. However, this isn’t the only aspect of collaborative work that we have been testing out in our project. In our initial work with two Year 7 classes, we were equally interested to explore how pupils work together to create something. Creativity means different things to different people – one could justifiably argue that everything, even the most analytical and discursive work is highly creative – but in this instance we were focused on the narrower idea of creativity as ‘creating something’ together. (Later in this blog, you’ll see how we witnessed the two coming together in the work that the pupils did.) In our trials, we did two activities with two different classes, in each case creating collaborative poems.

The first class, a higher ability set, having worked on poetry all morning (see my previous blog: 'Group work – Had we but time enough...'), went on, in the afternoon, to produce poems of their own about falcons. The second class, a lower ability set from a different school, read a short story, ‘The Paradise Carpet’, by Jamila Gavin, from EMC’s publication, Literary Shorts. Instead of responding to the story by discussing it, or writing about it analytically, they produced a poem based on it, using words and phrases from the story. In both instances, the students were given the opportunity to ‘find’ the material for a poem from the words of published writers. This gave them a pool of rich language to draw on. They worked together to select, organise, structure and make poetic choices and choices of meaning, including introducing those elements of patterning and repetition that we strongly associate with poetic writing. In both lessons, the work culminated in a reading aloud of each group’s poems, which provided a strong focal point and incentive to work with intensity and purpose towards a public outcome.

The students worked in threes. Each member of the group was given either a 150-200 word non-fiction extract from Helen McDonald’s H is for Hawk or ‘Peregrine Falcon’, a poem by Gillian Clarke. Each student selected five or six words or short phrases that they particularly liked and cut them out. The group pooled their selections and then worked together to choose from the words and phrases to create a poem.  They were told that they should bear in mind what they’d specially liked about the poems they’d encountered in the morning and include some of those favourite techniques in their own poems. For instance, they might want to repeat a phrase, a line or a single word. They might want to set up rhymes or echoes between words.  When they came to read out their poems, they were asked to make sure that every member of the group was in some way involved and that, at least once, all their voices should come together in unison.

A few interesting things emerged, that offer us food for thought:

Because I got to work in a group and it was so much fun.
Because me and my partner both got to put in our own ideas and combined them to make a great poem.
Because it was challenging and it got our minds working and it was also very fun because you got to hear other people’s ideas.
Because it was lots of fun working with my friends and using different techniques to make the poem as good as possible.
Because you had to work as a group to write AND perform a poem, so everyone shared their ideas.
Because my group had lots of ideas so it was really good.
Because we got to be really creative with our ideas and we made a brilliant poem.
Because I thought it was really creative and that there were some really powerful phrases in a lot of them.

It’s interesting to see the pleasure and pride in the work – not for any external reasons such as to get a good grade or to achieve a target, or fulfil a specific objective, but for the intrinsic value of the activity itself. Writing a poem you can be proud of, using techniques you’ve already been thinking about, appears to be reward enough. Fun in the classroom gets a bad press sometimes these days, but it’s interesting to see how the students identify the fun with other elements of learning – ‘a brilliant poem’, ‘powerful phrases’ – that we would all be pleased to see our students thinking about; the two go hand in hand.

a flying rain cloud
a complicated grey cloud
it lands, mobbed by crows, disguising itself
its prey there before him, a grey pigeon
a couple of flaps, fast like a knife-cut
there was new blood in the killing ground
blood still warm.

And just to give a flavour of how different the poems were, despite the common source of words, here is another:

I don’t remember looking down or away
From the beast within him.

I saw him whoosh past me.
And in that tiny black gap,
I saw a pigeon burst like a city but I smelt ice in my nose.
I saw a bright light in the corner of my eye.

A crow barrelled down
like a knife cut.
The crow was not stupid.
I took one step towards him and he flew away.

I don’t remember looking down or away
From the beast within him.

In both cases, it’s worth asking the question, ‘What do these students understand about poetry?’ It seems clear to me that they understand that:

One might justifiably say that these students could have come to this activity with some of this knowledge already in their heads – though interestingly, in the very first activity of the day, working on extracts from a range of different poems, their immediate focus was much more on ‘what it’s about?’ than on ‘how does it work as poetry?’ However, it seemed to us to be clear that writing poems themselves, and putting themselves in the role of poets, brought this element of their understanding to the fore.

If we want students to be attuned to the way poetry works as they progress through KS3 and into KS4, so that they can write confidently about line length, patterning, lineation, repetition and other key elements of language, structure and form, then what better way than to allow them to play with these elements early in KS3 and beyond?

The other group of students, working on a short story by Jamila Gavin, also wrote poems but the aim of the activity was very different – not so much to discover how poems work but more to use the writing of poems as a way to explore a narrative text independently. This is the kind of thing that we might also encourage at A Level – holding off from quick analytical or formal responses to allow for a more exploratory, almost oblique first response, that encourages something authentic as a first stage. Transforming a text takes the pressure off and avoids the leap to instant judgements, with a focus on ‘What’s it like?’ and ‘What’s interesting about it for you?’ rather than ‘What’s it about?’

Like the first class, they were asked to write poems for performance, in groups. The story was read aloud first. The students then went straight into groups to create their poems. One group was given a long list of words and phrases from the short story to select from. Another selected their own ‘favourite’ words and phrases. A third was just given a title, ‘The Wealthy Man’. A fourth was told that each line of their poem should start with the name of the main character, a boy called Ishwar e.g. Ishwar knew…Ishwar longed for…Ishwar heard… Ishwar thought… A fifth had to pick words and phrases from the dialogue only.  The different prompts allowed us to try out a range of different ways into the task.

It was interesting to observe how much the work took them back into the short story. We witnessed them delving back in and, almost with a sideways glance, discovering more about it as they constructed their poems. One group became fascinated by the ending, trying to grapple with the puzzling issue of what exactly had happened to Ishwar and the underlying question of whether his life had been so bleak and depressing that he had escaped into the carpet – just the kind of reflection we would have wanted. Another group excitedly came up with a refrain that summed up the trajectory of the story – ‘One knot blue, two knots yellow, three knots red, four knots dead’, the italicised words being their own invention.

One of the groups wrote this poem. (The different text formats represent the three different voices in the performance.)

This was produced without any discussion of the story as a class, yet by writing the poem the students found a way of conveying some of the rich descriptive qualities of the original. They went beyond extracting the most basic elements of the storyline; the phrases they selected and repeated stand out as being particularly magical, exotic and vibrant, showing the students’ pleasure in the sounds of the words and the images created. The choice of refrain is also a clever one, constantly returning to the endless work of the boy in making the carpet.

What this work reinforces is that creativity and analytical thinking in group work are both valuable. Both are also fun. And, importantly, they are not neatly, or easily separable into rigid binaries. Analysis is creative; creativity involves analytical thinking. They work together hand in glove, to support students’ growing understanding and knowledge of how texts work.  Working in groups on a creative task, with the incentive (and pressure) of a performance, can be a powerful way of developing understandings about texts and how they work, and a stimulus for students to write themselves.

What terrific examples of collaborative, exploratory and creative classroom practices which lead to new understandings about poetry as well as new writing. By Sue Dymoke on 05th Jan 2017
Print Share