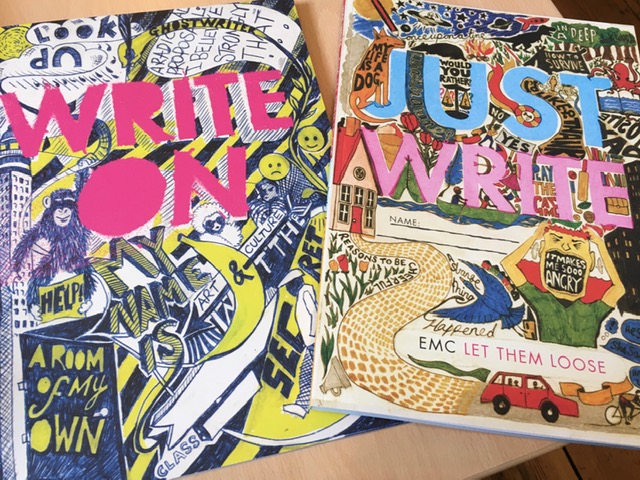 Just Write (Y7/8) and its follow up publication, Write On (Y9/10), are designed to let students do what the first book’s title suggests – to just write. They provide students with space to draw on their own ideas and language resources, probably once a week or a fortnight, in order to practise their writing freed from teacher directions and constraints.

Just Write and Write On are far from ‘anything goes’ publications, though. As I’ve previously written about, they can be used in ways that provide opportunities for students to develop self-regulation strategies when writing. With 44 prompts to draw on in each, they also require students to engage in many different kinds of writing – from formal speeches to free verse poems, from detailed instructions to film pitches, and from impassioned rants to vivid descriptions.

Personally, I think that the books should remain free from marking, though this is always a teacher choice. This doesn’t mean I think the books should remain entirely in the hands of students. Reading what students write in them can be highly informative, revealing all sorts of things about their communicative skills – what kinds of writing they favour, how much they can write without direction, where their strengths and weaknesses lie, and so on.

So, while I wouldn’t mark copies of Just Write or Write On, I would read them as part of a wider process that would inform a broad, varied set of strategies to develop students’ written work. While work elsewhere would be marked explicitly both in terms of technical competence and effect on the reader, I’d regard the work in these workbooks as experimental, part of a process of playing around with language with a degree of freedom rarely ‘permitted’ in exercise books. This is to recognise that writing serves many functions. It can help students, for example, to think aloud, experiment with ideas, test boundaries, take on different roles or assert their own opinions. Writing that takes risks and experiments with different styles can sometimes lack coherence and clarity, but that’s not to say it isn’t worthwhile. It’s part of a process that over time develops confidence (and competence). So students’ writing shouldn’t always be judged on the criteria of how ‘good’ it is at a given point in time but also on the basis of what they’re trying to do, how new the particular type of writing is to them, what their ideas are, and so on.

What follows is a short account of how Just Write was used with one Year 7 student over a few weeks. In the interests of full disclosure, I need to point out that the student is my own 12-year-old son. I’m going refer to him as ‘the student’ throughout. He was working alongside three other boys, who gathered in my back garden once Covid-19 lockdown restrictions were eased.

My intention was to develop the writing of all four boys without having to mark and ‘correct’ their Just Write books or direct them about what they should write. I’ll address later how this approach might be scaled up for whole classes.

The student was asked to select a writing activity himself and given about 25 minutes to complete it. He was given no guidance about the selection, or help during writing. He was pleased with the work when he’d finished and was pleased to read it out loud. It’s an interesting piece to read, telling us lots about his own life. He has a clear sense of narrative, repeating a phrase at the beginning and end with variation. He does this for effect, showing a sense of audience. There’s a clear sense of voice and it seems apparent that he likes writing humorously. You also get a sense of his own world – the centrality of school, friends and parents. There’s much that cries out to be worked on. There are no paragraphs and the piece seems rushed at the end, suggesting a lack of planning, or understanding of how to sustain a narrative. Punctuation is missing, there are some basic spelling errors and there is no evidence of reading through the work to make corrections or changes. 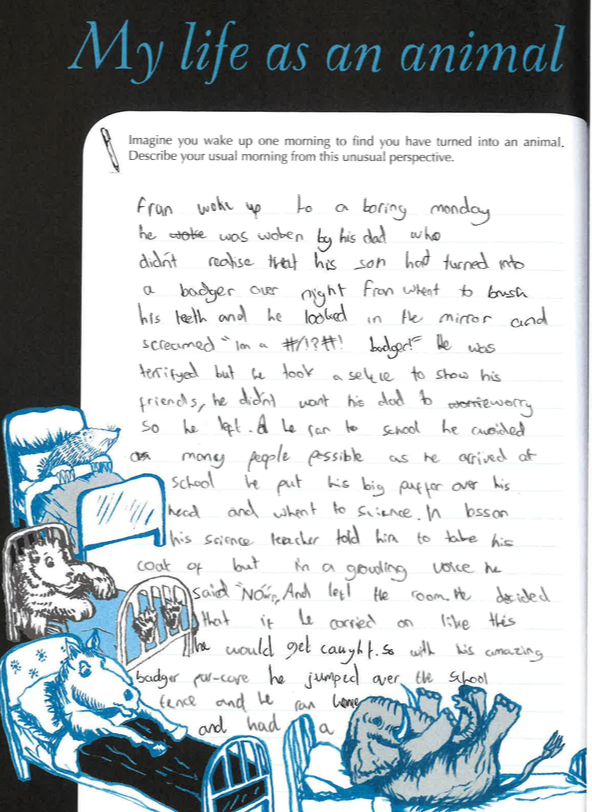 The student was given the same instructions as for stage 1. Interestingly he once again chose to write a humorous narrative. The strengths and weaknesses are almost identical, though this is possibly a little weaker, revealing even more need of some prior planning, even if just to jot down a few ideas. 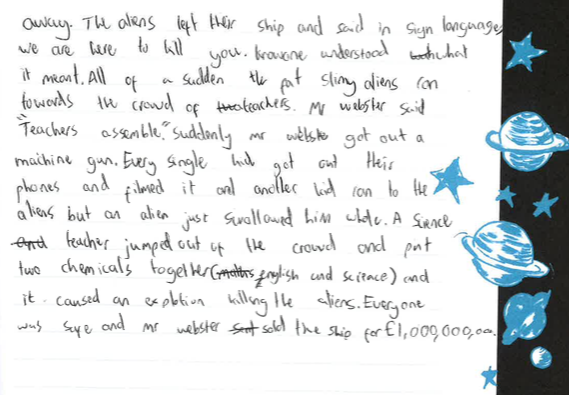 The student had deliberately not been given any feedback focusing on what could be improved in his work. This was to foster in him a sense of ownership of Just Write, and to make him feel that he was writing more for himself than for me. However, at this stage I wanted to find out how he coped with different kinds of writing. Therefore, I directed him to select one of the non-fiction pieces in Just Write.

The writing he produced was weaker than his narrative pieces. Here the humour seems rather misplaced and, overall, this short piece reads like a series of undeveloped thoughts. It suggests that as well as needing help with planning and sustaining his writing, he also needs help understanding the form in which he has been required to write. (It also needs pointing out that it was incredibly cold working outside on this day - physical conditions can play a big part in writing.) 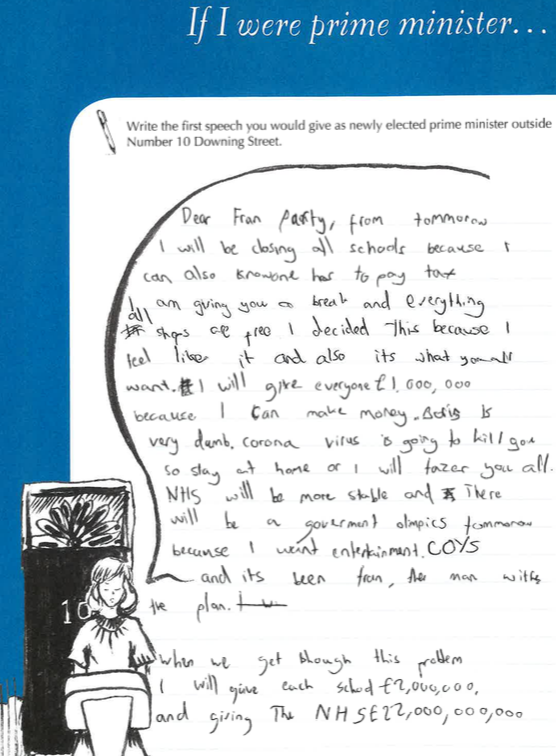 At this point I wanted to intervene in the student’s writing in order to move it forward, without having to correct his work or point out what was wrong with it. That isn’t to say this isn’t ever worth doing . Lots of more direct intervention was going on with written work he was doing in other contexts. In this instance, it was in order to keep Just Write as a different kind of writing. To do this, I identified some of the key points I wanted the student to work on and designed a formative self-assessment grid with this in mind.

The statements were phrased to draw attention to what the student could do rather than could not. He was asked to rate himself against each statement on a score of 1 to 5. The two lowest ranked scores would form the basis of our focus for subsequent lessons. The statements were chosen so that it was almost certain that the student would identify the need to work on paragraphs and on planning and checking work – which he did. Statement banks like this are brilliant for helping students in the ongoing process of developing self-regulation strategies for improving their writing. 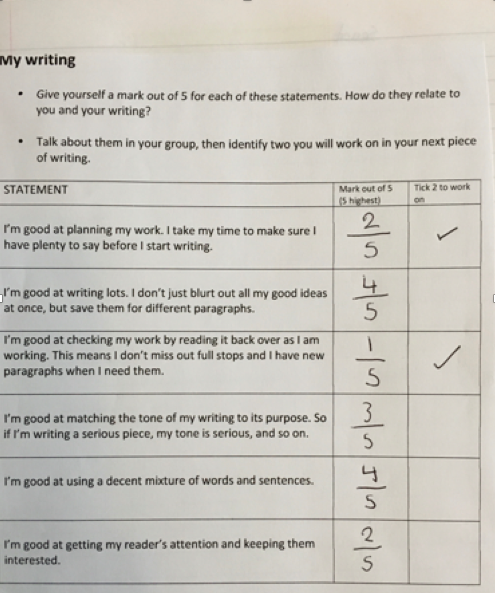 Given he had selected these as areas to work on, I didn’t have to ‘correct’ his work, but could confidently offer advice about how to improve on these areas. Specifically we looked at sketching out a brief plan of 4-5 paragraph ideas before planning any piece of work. We also talked about the importance of checking work.

The improvements in the student’s work are striking, particularly in terms of paragraphing. Both of the pieces of work here are clearly paragraphed and progress in a logical fashion. The student has maintained his strong sense of voice and quirky sense of humour. In the second of these pieces, in particular, he is also revealing a lot about his own life, information that is not confidential, but is helpful for a teacher to know.

There is still much to work on. The work is fairly slight and each paragraph, particularly in the second piece, could be further developed. However, this seems to be something much easier to address now that the student is writing in distinct paragraphs. 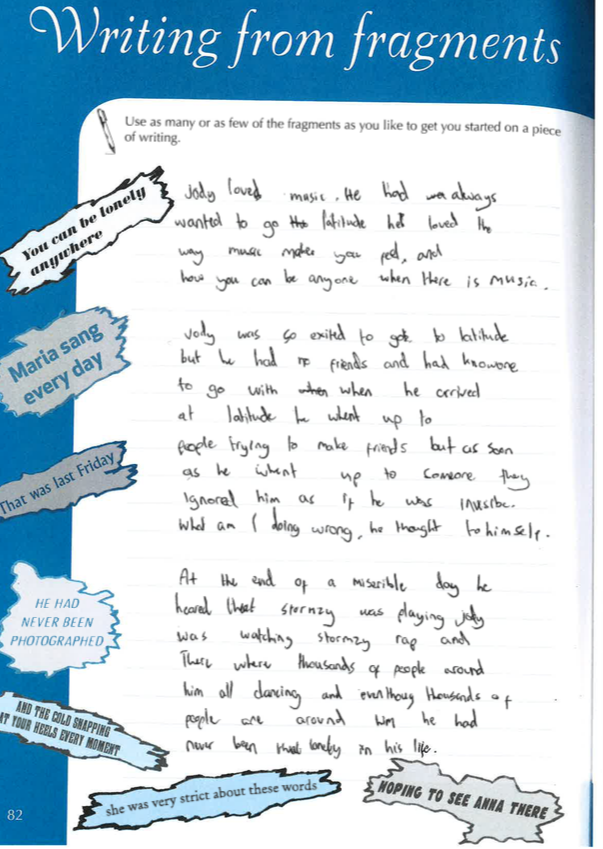 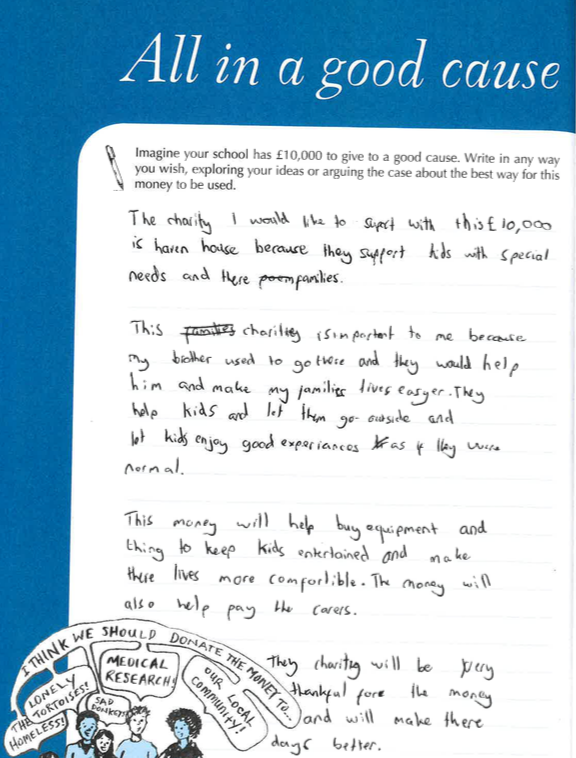 Alongside using Just Write, he was also working on a series of short stories from EMC’s Literary Shorts. Having explored five stories, he was asked to write a story of his own, drawing on what he had learned about story writing from his study. Before writing, the group looked closely at how Geraldine McCaughrean structured her story, ‘The Gulf’, about a boy running away from an unknown enemy. The students were given the option of using this story, but could also borrow from different structural tropes they had noticed elsewhere. These stories were more carefully planned and also redrafted. The student’s final draft is noticeably stronger than his work in Just Write. It is more sustained and detailed, as well as more accurate. Interestingly, while it does borrow from 'The Gulf', its final sentence mirrors another story that we studied, Joe R. Lansdale’s ‘Dog, Cat, and Baby’. The student is developing the very areas of his work identified in Just Write. With more time, he can demonstrate this more effectively – but it seems likely that the work in Just Write is helping him reach this stage in his development. 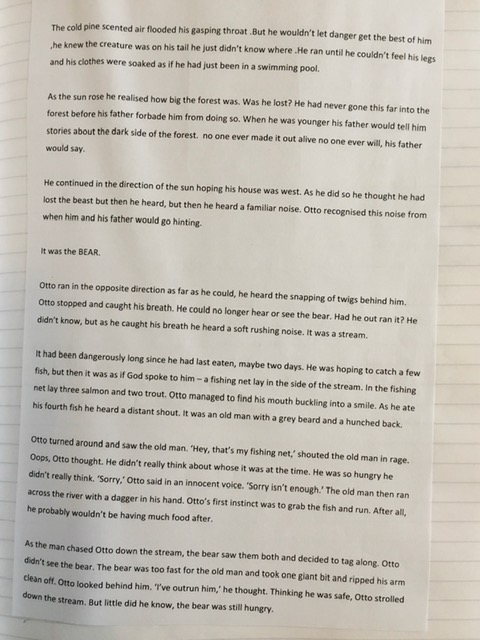 Interestingly, the next piece that the student wrote in Just Write began to show further signs of improvement, particularly in terms of the thinking about writing, and the level of care taken with it. For the first time, significant alterations were made to the text during writing. The student is now reading his work back and forth while writing, and actively seeks to make it better. The work bears resemblance to his earlier material in tone, but there is an increased level of sustained writing, and a growing level of sophistication, care and reflection. 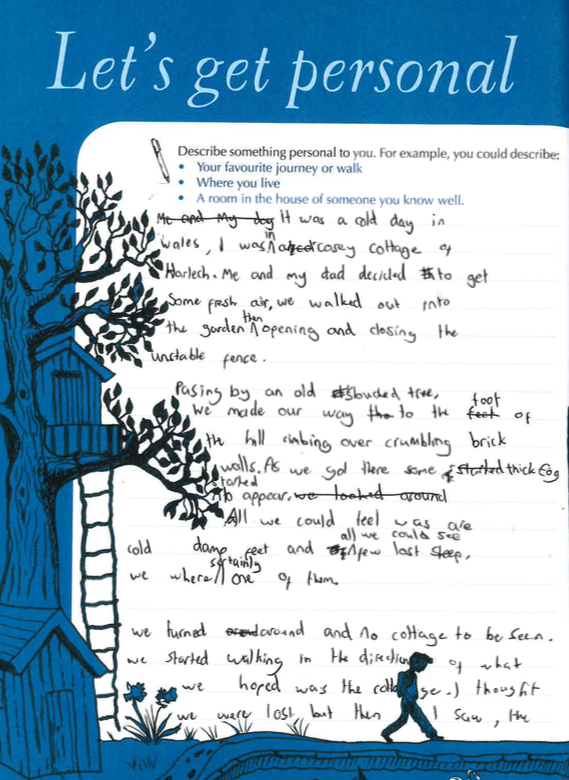 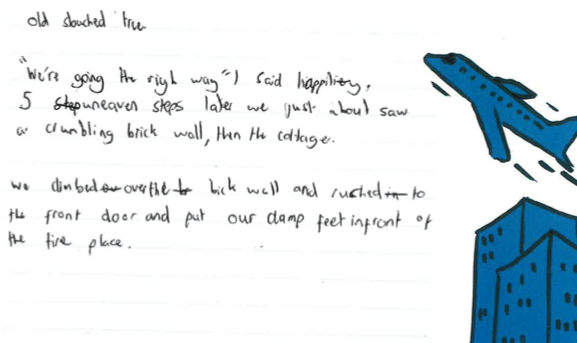 So has this student been ‘just writing’? The answer is yes and no. The work is all his own. It doesn’t rely on writing frames, or word banks, or sentence starters. That said, the improvements in the final three pieces appear to stem from the intervention using statement banks, accompanied by discussions about how to plan and proofread.

What the writing can’t show is the confidence that the student developed in experiencing an approach that never focused on what he was doing wrong, never directed him about what he could and could not write, and always left a large degree of choice in his hands.

My colleague, Lucy Hinchliffe, who uses Just Write with her Y7 students, made the following suggestions about how to scale up the strategies described here for whole class use.