At the start of this term the English and Media Centre conducted a survey into numbers of students signing up for this year’s A Levels in Literature, Language and Lang/Lit. The findings are written up here. 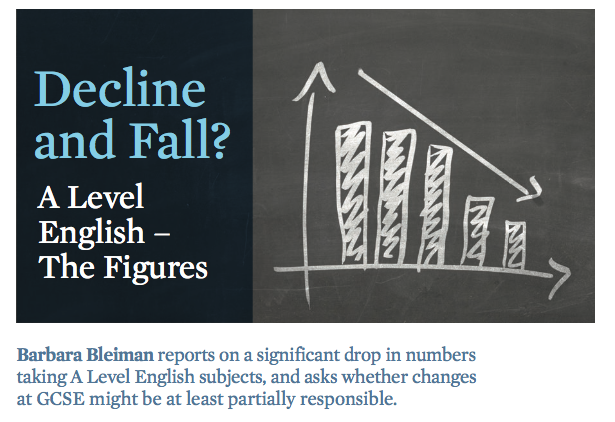 The English and Media Centre carried out a survey into numbers of students signing up for this year’s A Levels in Literature, Language and Lang/Lit  on behalf of the Common English Forum, a loose affiliation of organisations working in English at primary, secondary and tertiary levels. Schools and colleges that took part were self-selecting, responding to a group email that we sent to our subscribers and which we also publicised through social media. The results, then, need to be approached with a degree of caution but, given the large number of responses we received, (over 100) and the way that the findings coincide with general perceptions on the ground, we think that they need to be taken seriously and investigated more thoroughly.

The headline figure is that significantly fewer students are signing up for all three A Level English courses than in previous years. Adding together figures from the 106 responses reveals a 16% reduction in the number of students taking Literature in 2017/18 compared to 2016/17, a 17% reduction in Language and a 26% reduction in Lit/Lang. (Table A)

In approximately 30% of the cases for Literature and for Language this has resulted in a reduction in the number of classes running or even in courses folding altogether. The figure for Lang/Lit is a startling 45%. (Table B)

The survey also tried to find out why this reduction in numbers has occurred. Far and away the largest factor was felt to be the changes to A Levels across all subjects which mean that many students no longer take AS Levels in Year 12, but now start with just three subjects, on a two-year linear route. Beyond lobbying for another change to the system, then, there is little that teachers can do to influence this and it is undoubtedly affecting other subjects too, not just English. However, the survey did suggest that there are other factors affecting numbers that are not to do with this structural shift and move from broader to narrower subject uptake, but with the very nature of the subject of English itself and how it is perceived.

One aspect of this, much referred to by teachers, was the emphasis on STEM subjects at school, among parents and in students’ consideration of options for future study at university. There is a strong perception that the intense promotion of Maths and Science has led to a reduction in uptake for English.

After the loss of four AS levels, however, the most cited reason for students not taking up the subject for A Level was the content of the new GCSE English exams. Teachers commented that the new GCSEs were “narrow and dull”, that “students really dislike them and are intimidated by the workload” and that they fail to engage students because “everything is performance focused”. Others made the point that “too much emphasis on testing has destroyed any creativity in this subject” and that “we have killed this subject with the new, terribly boring GCSE”.

Such responses, though very much in the majority, were not common to all. One teacher believed that uptake had increased at their centre “because of the new GCSE, not despite it” and another commented that “there is much greater sense of coherency between GCSE and AL as the skills and question styles logically progress”. Such comments are more in keeping with the results of a question that asked how well GCSE has prepared students for A Level. (Table C)

How, then, can the perception among teachers that the new GCSE is preparing students quite well – or even very well – for A Level, be reconciled with the simultaneous perception that it is putting them off continuing with the subject at A Level? There’s no straightforward answer, but it might well have something to do with the nature of the subject itself at GCSE, its content and how it is practised, as much as with notions of academic rigour and clear disciplinary boundaries. For years English teachers have prided themselves on teaching a subject that is both academically challenging and engaging, that has its own disciplinary constraints, but which also has logical links to the real world and the lives of students themselves. Perhaps the narrower focus in the new GCSEs, combined with the loss of coursework, the limited opportunities to study texts beyond the traditional English canon, the requirement to study a complete nineteenth century text, the removal of the spoken language component and the downgrading of oral assessment, have simply made it less attractive as a subject to a broad sweep of students. If students perceive the subject as difficult, intensely pressurised and boring, however well they do at it, they won’t leap at the chance to study it further. There are many ways to make a subject rigorous, but perhaps rigour does not necessarily equate to better.