There has been an increased focus on the teaching of grammar in primary and secondary schools since the introduction of the new National Curriculum and the revision of examination specifications. In this blog, Andrew McCallum explores what that means for secondary English teachers and questions whether a knowledge of grammar, in and of itself, leads to improvements in reading and writing. 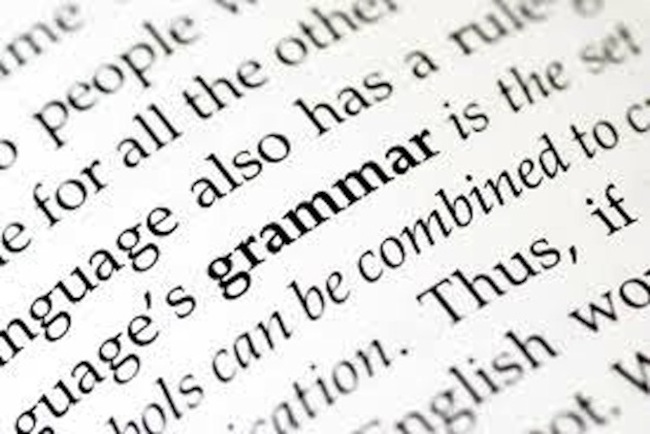 We’re huge fans of grammar and grammar teaching at the English and Media Centre, believing firmly that it has an important role to play in helping young people to understand how language works and to develop their own writing. But our fandom comes with one important caveat: namely that teaching students a long list of grammar terminology out of context has no impact on the quality of their reading or writing.

And evidence for my claim? It is plentiful, it would seem. Myhill and Watson’s 2014 meta-analysis of research into grammar teaching over the past 50 years, 'The role of grammar in the writing curriculum: A review of the literature' found that “there is no evidence base to support [the] assertion that learning progresses chronologically from learning a grammatical concept to being able to apply it” (44).

This makes the ideology behind the government’s primary curriculum puzzling, especially given its commitment to ‘what works’ and ‘evidence-based learning’. And if anyone thinks I am being unduly harsh and that the primary landscape must be more nuanced than I am suggesting, here are the words relating to this point from the DfE’s English programmes of study for KS1 and 2:

… once pupils are familiar with a grammatical concept [for example ‘modal verb’], they should be encouraged to apply and explore this concept in the grammar of their own speech and writing and to note where it is used by others. (64)

The role of primary teachers is to stuff their young charges full of grammatical terminology, then we secondary teachers will reap the benefit when they actually use them.

Except I don’t think that we will. Yes, we will be confronted by massed ranks of Year 7s proudly telling us the difference between a transitive and an intransitive verb, or explaining how to spot an example of the subjunctive mood. But will they be better readers and writers? I sincerely hope that they will be, but the evidence suggests otherwise. Or, at least, the evidence suggests that the kind of grammatical knowledge that the National Curriculum encourages them to learn for their end of key stage 2 test will not make them better readers or writers. And logic dictates that if they are spending considerable amounts of time preparing for these tests by learning to distinguish between different forms of parentheses, or grappling for the umpteenth time with identifying a fronted adverbial, then they will have less time than in the past to focus on more fruitful pursuits – like reading and writing!

All, though, is not doom and gloom. For example, there is a deep understanding in many primary schools about what really matters when teaching young people to develop their language capabilities. This is exemplified superbly in the work of the Centre for Literacy in Primary Education (CLPE). They don’t shy away from the reality of schools being judged against the KS2 grammar test, but they show how knowledge about grammar can be taught in a contextualised way, so that it has a genuine impact on wider literacy skills.

And at secondary level, the logic of the curriculum means that teachers can cast aside the prescriptivism foisted upon primary colleagues, offering a descriptive approach instead: in other words, we can focus on the how of grammar rather than the what. In their final GCSEs, students will be rewarded for demonstrating the ability to choose wisely from the range of grammatical options at their disposal and for commenting on aspects of language as they see fit. They will not definitively have to identify the perfect aspect of a verb or demonstrate they can use a reflexive pronoun.

Does this mean that we should discard all the learning of linguistic terms that has gone on in primary schools? That would seem a waste. If students have a rich linguistic vocabulary then we should encourage them to use it where it is relevant. But we shouldn’t agonise over covering every term. If they don’t look at the subjunctive in your lessons, frankly who cares? Just so long as they are doing lots of great language rich work instead. And we shouldn’t go over the more significant terms endlessly. Instead, we should make them part and parcel of everyday classroom practice. Use them liberally and whenever possible as a matter of course, but don’t start every lesson asking for a particular definition or try to drum in what a progressive present or an adverbial phrase is with some decontextualised rote learning. The evidence says it won’t help to improve reading and writing. (And if you do want to remind students of the vocabulary available to them, then here’s a sheet that contains all the terms they cover at primary school, plus a few more.)

I haven’t, of course, directed you yet to any evidence that contextualised approaches to grammar learning, whatever they might be, do work. It exists, though. A body of knowledge is beginning to develop that suggests that teaching young people about the different grammatical choices that are available to them in their writing, and about when to be cautious and when to be experimental with these choices, can have an impact on their writing. In other words, the how of grammar trumps the what. A perfect starting point is the Myhill and Watson article which, towards, the end, directs you to several sources (53-54).

I feel that your piece contains an often repeated straw man. Reading your post one might think that there are a lot of baddies out there who want to teach children "a long list of grammar terminology out of context". Who are these people? I don't think there is anyone who wants to teach a list of grammatical terms, or who advocates doing so. That would be the same as teaching kids a long list of literary terms such as metaphor, simile, etc., without illustrating those concepts in poems and novels, and without teaching kids to use them in their own writing.

"… once pupils are familiar with a grammatical concept [for example ‘modal verb’], they should be encouraged to apply and explore this concept in the grammar of their own speech and writing and to note where it is used by others."

"If students have a rich linguistic vocabulary then we should encourage them to use it where it is relevant".

Are these statements very different? Don't get me wrong, I'm NOT a defender of the DfE's policies, but I think you twist their words.
By Bas Aarts on 05th Feb 2016
Thanks for your comment, Bas. Perhaps my image of pupils being taught a long list of terms was slightly over the top, but it stands as a short hand for an approach that focuses on learning a set of terms in preparation for the end of KS2 grammar test, rather than using grammar as a way to improve reading and writing in general. Talking to primary colleagues, this does seem to be going on to a worrying degree. Similarly, the requirement to use 'key literary and linguistic terminology' in the new GCSE specs and to teach it at KS3, is leading to some fairly weird and reductive practices. For example, students draw attention to the fact that a piece of writing uses nouns and verbs and somehow give this significance, without referring to the meaning of the text at all.

My reference to a 'rich linguistic vocabulary' was made because I don't want to deny that pupils will enter secondary with a bank of words that they didn't have before. My point, though, is at what cost to the rest of the curriculum, and to what end.

And I really don't think I'm twisting the DfE's words. This is a direct quotation, after all, and seems to represent fairly accurately the underlying philosophy of the architects of that curriculum. Here are the words of architect-in-chief, Michael Gove, responding on Question Time to a question about his then new National Curriculum putting a curb on children's creativity:

"Creativity depends on making sure that you master certain skills, you acquire a body of knowledge before giving expression to what's in you ... if you want to pursue creativity in the way you write, you need first of all to learn your skills: to secure a foundation on which your creativity can flourish. If you're going to write, if you're going to move, if you're going to inspire, then you need to be able to know how the English language can be used and tuned, in order to move hearts, in order to persuade people. You cannot be creative unless you understand how to construct sentences, what words mean, how to understand grammar."

I'm not saying that I don't want pupils to understand grammar, just that language learning is more complicated than an input-output model (grammar in, good writing out), as well as being, primarily, to do with exposure to actual language in use and lots of practice, unimpeded by the cumbersome constraints of having to think about aspects of grammar at the same time. By Andrew McCallum on 07th Feb 2016
The ks2 grammar test is so constructed that it requires blind knowledge of grammatical terms, as these terms are included in many of the questions. As a result, without arcane terminolgical knowledge, pupils cannot answer the questions at all, so test scores will be low and schools and teachers will be assessed as being under par. So, schools require their teachers to ensure that pupils can answer the test questions by making sure they know the relevant terminology. None of this requires, encourages, or indeed leaves time, to learn how to construct or understand grammatically sophisticated writing. The curriculum requirement that leads to this focus on teaching/learning these terms is therefore fundamentally flawed. How much better if primary and junior schools focused on simply improving writing and reading through stimulation, practice, correction and repetition, and leave the meta knowledge of grammatical terms to high school (or beyond?). By adrian ward on 09th Jan 2017
Print Share