The Value of Talk, or How We Need To Use New Words To Learn New Words

The English and Media Centre’s Director, Andrew McCallum, argues for the central importance of contextualised talk when teaching vocabulary development. 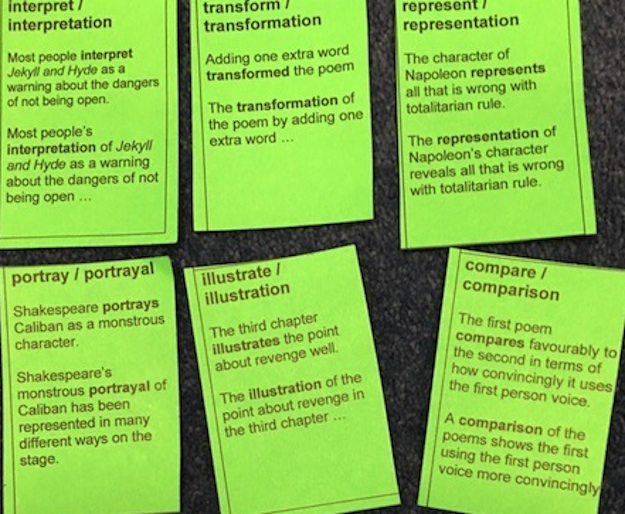 Vocabulary development can be particularly challenging to teach. Words cannot be treated simply as items of knowledge to be entered into the memory banks of pupils, because their meaning depends upon the particular context in which they are used. Such is the complexity of this aspect of English study that even the leading exponent of a knowledge-based approach to learning, E.D. Hirsch, is clear about the inadequacy of simple transmission methods, stating that:

Most vocabulary growth results incidentally from massive immersion in the world of language and knowledge… It has long been known that the growth of word knowledge is slow and incremental, requiring multiple exposures to words. One doesn’t just learn a word’s meaning and then have the word. One gradually learns the word’s denotations and connotations and its modes of use little by little over many, many language experiences.

(In Reading Comprehension Requires Knowledge – of Words and the World, by E.D. Hirsch)

Hirsch has some good ideas about how to organise a curriculum so that a degree of planning goes into covering new and challenging vocabulary in systematic ways. This primarily involves organising words into domain specific categories so that they can be learned and reinforced in relevant, contextualised situations.

He is less clear about how teachers might actually teach these words. This is where, at the English and Media Centre, we like to think that we can offer some help. We have lots of ways that we think we can do this, but one we are keen to promote is through using structured group talk. For while it would be overly simplistic to say that Hirsch’s admirers are entirely dismissive of well thought-out classroom talk in small groups, it is certainly not something that they actively seek to promote. But such work, I would argue, is absolutely essential in the development of a young person’s vocabulary because it is primarily in the context of meaningful, dialogic talk that the subtle nuances of what a word means begin to take shape. (And group talk, of course, can develop many other forms of knowledge, not just vocabulary, as we’ve blogged about previously in Speaking Up For Group Work, and In Praise of Group Work.)

Key to success, of course, when using talk for such purposes, is making sure that students have access to new vocabulary, or vocabulary that they need to use with greater confidence and precision . This is tricky because when talking (or writing) we can only really draw on the linguistic resources we already possess; and in a classroom any given group of pupils is likely to have a relatively similar range of words at their disposal. However, teachers can stipulate particular aspects of vocabulary to be covered in ways that both generate new and reinforce existing knowledge.

The brown cards illustrated below offer a perfect way to do this. They are from an activity that encourages pupils to explore the relationship between different characters in Romeo and Juliet. Pupils work in groups of three or four, following this simple sequence: 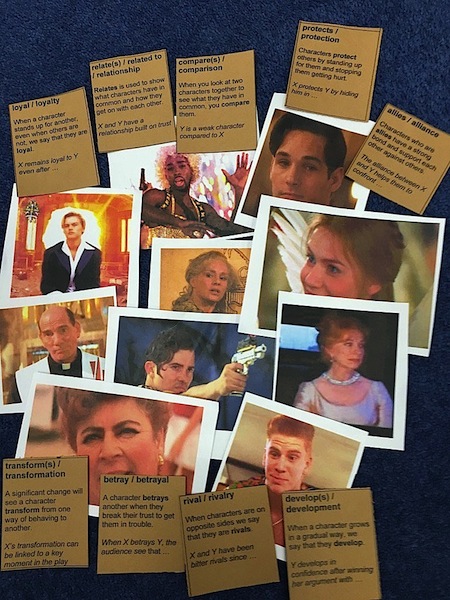 These particular cards offer multiple entry points and were designed for use in a mixed ability class containing EAL pupils. Pupils already confident about most of the words can simply read the first line. They still get to reinforce their use of a word and are also given the chance to practise using nominalisation (e.g. ‘betrayal’ instead of ‘betrays’). Less confident pupils, or those particularly insecure about a word’s meaning, can also read a definition and a simple example. Of course, they also get the chance to listen to their classmates, and to add their own comments about the use of other words.

These cards tackle character at a relatively straightforward level. The green cards, also pictured, offer more of a challenge. They focus on vocabulary used when writing about almost any text in a formal way. Again, pupils are given the option of choosing between the verb form or nominalisation. The great thing about these cards is that they can be used on numerous occasions without the learning growing stale. This is because the focus is always on the actual text being studied, with vocabularly development an important adjunct to this. 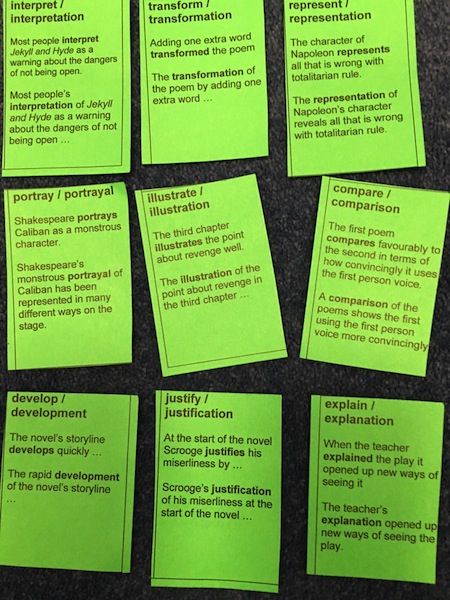 Both sets of cards draw on what Jim Cummins, an expert in bilingual learning, calls ‘academic’ English. As you can see, this does not consist of particularly unusual or difficult words, but high frequency words with multiple meanings that often occur in academic contexts (such as school) and which are indicative of a mature language user. Such words, Cummins’ research suggests, take several years longer for EAL pupils, or indeed any pupil, to grasp compared to the more straightforward vocabulary of everyday interaction.

Reading his work, and also Beck, McKeown and Kucan’s Bringing Words to Life *, another book that stresses the importance of context in language learning, made me realise that the most important vocabulary to focus on in lessons is not the ‘key linguistic and literary terminology’ that is given prominence in the latest incarnations of the National Curriculum and GCSE specifications, but the language that, as a proficient adult reader, it is all too easy to take for granted. The former is certainly getting a lot of attention in English lessons at the moment, with the risk that the subject becomes, to too great a degree, an extended exercise in feature spotting, without really pushing forward pupils’ linguistic repertoires. Sure, it feels empowering to know your chiasmuses from your antimetaboles (what?!), but real empowerment comes from being able to use words that occur far more frequently but which are deceptively tricky to grasp. And it comes from recognising the precision that is needed in using such words, precision that is most readily practised and developed in group talk, when a word might be used and heard on several occasions within a very short space of time.

'This text is not just recommended reading: indulging in The Literature Reader will send shivers down your spine an… https://t.co/jswmgIDEoQ

Bookings for this afternoon online conference on Weds 26 June, run in partnership with @GuardianEduCent, is for Eng… https://t.co/ty3YWmnDxi

RT @EngMediaCentre: Looking for new ideas for teaching AQA poems at GCSE? Join us online for 'Teaching the Love & Relationships Cluster of…