Why Study English Language or Linguistics at A Level and Beyond

Erika Darics, Senior Lecturer in Applied Linguistics at Aston University, explains what the study of language has to offer, not only in terms of the valuable skills you’ll develop, but also because the content of what you study will turn you into a critically and socially aware person. 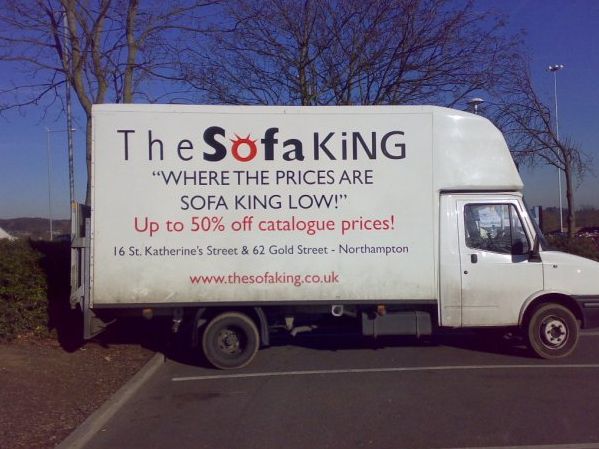 As I am working on the review of a journal article, I have two documents open in front of me. The first one is a recent article in The Atlantic talking about the crisis of humanities subjects. The trend of students “fleeing” humanities is shocking, and the drop in the number of those who sign up for English degrees (down 49% in US institutions in the past two decades) is particularly painful for me – a lecturer of applied linguistics. The statistics come from the United States, but a similar picture is emerging in the UK university system.

But I am not only upset because I’m passionate about my subject – my confusion is related to the other document I have open in front of me: the Employer Survey conducted by the Association of American Colleges and Universities. In this report executives and hiring managers have been surveyed about the skills they value as the most important for new graduates, the very skills offered by humanities degrees: oral and written communication skills, critical thinking, teamwork, or one’s ability to apply knowledge in real life. 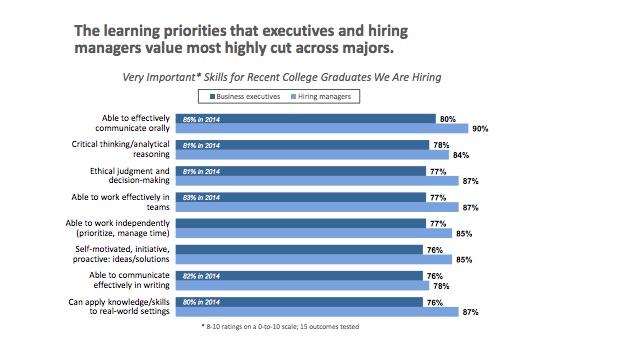 I am puzzled: why do students avoid subjects like English for fear of poor job prospects when the real world clearly needs their skills: language-savvy, good communicators with excellent analytical and critical thinking skills?

Just think about it: language is woven into every aspect of our lives. You may be woken up by the voice of the news presenter and register the headline about Trump’s latest conundrum. You go on to take a shower and the ‘cosy-chatty-witty’ label on your shampoo makes you smile. On the way to school the slogan on a new billboard catches your eye. You notice the sign in your favourite coffee shop and wonder when words like ‘frappuccino’ and ‘babyccino’ were first invented. You absent-mindedly glance at the leaflet about an exhibition that was just pushed in your hands. As you approach the school gates, you hear your mates sharing a saucy story before suddenly changing their topic and tone when they see the biology teacher appearing from round the corner.

Before you had even had a chance to say your first ‘good morning’, you were exposed to language through marketing and corporate communication, political discourse through media reporting, you wondered about language change and the ways we use language in interaction differently in different contexts with different people.

The problem with language is that it is so self-evident that we barely stop and take notice. This is why we are not always aware of just how important it is: the words we choose, the grammar we use, the topics we decide to raise have a direct influence on our thoughts, our actions and even on what we believe to be real.

Language in Business and Politics

Language works in subtle ways, subconsciously – something that is often exploited in business and in politics! To give an example of the former, imagine you want to buy some milk chocolate. Which one of the two brands would you consider as creamier: a brand named Maluma or a chocolate named Takete? What was likely to influence your choice might be the fact that sounds can evoke certain emotions and sensations (it’s called sound symbolism or crossmodal-correspondence). Therefore understanding how sounds work (something that you may pick up in a phonetics or phonology class) is enlightening for you as a consumer, and receiver of marketing messages, but may also become exceptionally useful if you end up in any work that involves promotion, branding or marketing.

The way language subconsciously influences our thinking is also of huge significance in the political arena. Think about how your reactions may change if you hear a story about political refugees or – changing the frame – of immigrants “flooding” or “swamping” the country, or taking it even further, referring to people like ‘animals’. Clearly, the labels we use will influence what we believe to be true and real: in the previous example whether we perceive immigration as a cause or as a threat.

How Language Can Influence Behaviour

And if this weren’t enough, apart from influencing thinking and perception, language can also have a very direct effect on people’s behaviour. In a famous experiment for example, researchers tested the reaction of people waiting to use the photocopier. They designed three scenarios, where a person wanted to jump the queue. The three scenarios only differed in the wording of the apology offered by the person who wanted to break in:

2) Excuse me, I have 5 pages. May I use the xerox machine, because I have to make copies?

What they found is that simply using the word 'because' and giving a reason resulted in significantly more compliance (93% as opposed to 60% compliance where no reason was given). This was true even when the reason was nonsense, such as “because I have to make copies”. The researchers thought that the act of explaining itself and the use of because was enough for people to look favourably on the queue-jumper’s request.

Of course the impact of our words on how people act may not always be so straightforward, but if we understand the role language plays in influencing behaviour it may be very useful in many areas of our lives. Just think about negotiating who washes up the dishes or negotiating business or political deals, when you want to persuade friends to see a movie or motivating and persuading employees at a work, or for example when you want to communicate confidence during the first date, the first job interview or that all-important business pitch.

What Studying Language and Linguistics Can Do for You

The study of English Language or Linguistics will help you understand how people communicate and assign meaning (semantics), how they do things with words (pragmatics) or how language relates to social factors (sociolinguistics), psychological aspects (psycholinguistics), or power and injustice (discourse analysis). Studying these subjects will open your eyes to a world that has previously been hidden in plain sight. I’m taking a long shot by assuming that you have seen the 1999 cult movie, Matrix – if you haven’t you really should! As one of my students said, studying various aspects of language is like the awakening of the main character, Neo in Matrix. When he swallows the red pill he becomes aware of the false world that has been hidden from him, he learns to read ‘the code’ and understand the true nature of his world.

By studying language in depth, you will develop critical awareness and gain invaluable skills for your future working life – vital communication, analytical and critical skills. But importantly, such critical awareness will allow you to be a conscious, critical human being who is able to challenge taken-for-granted assumptions, understand the role of language in social control, propaganda and manipulation, and be able to use this understanding to make the world a less oppressive, more equal and just place.

If you are thinking of studying linguistics or English Language at university you don’t have to have studied A Level Language, though obviously having done so will give you a really good idea of what it will entail and an introduction to some of the modules you may end up taking.

There is a vast range of courses on offer. Linguistics can be a subject on its own but it is also often taught within Modern Languages departments, alongside a whole host of languages. English Language tends to be taught within English departments, where the focus is, as the name suggests, more on the development of the English language than on linguistics in general, or comparative linguistics. Language and linguistics both feature in many different combined degrees.

Most universities offer courses in Linguistics or English Language. The list below gives a flavour of some of the vast range of courses on offer. Erika Darics’ own teaching is on a BSc in Business Management and English Language.

History of Art/Archaeology and Linguistics

Linguistics and French/German/Spanish/Russian and many other modern languages